Okay. First and foremost, Zion is incredible. Hands down one of the best national parks we’ve been to (since our total is now at two).

Kiley took the reigns on researching what hikes we should do in our less than 24 hours in the park. She concluded it was essential we hike through The Narrows and up to Angel’s Landing, both of which were listed on many people’s “must do” lists when visiting Zion.

The Narrows was a hike unlike any other. Majority of it was actually through the Virgin River at the bottom of the canyon. We weren’t entirely sure what we were getting ourselves into, so we more or less followed the lead of others. Which, looking back on it, might not have been our most educated move. Most of the people around us were foreigners who rented these strange neon hybrid water/hiking boots and stopped to take photos of squirrels along the path. Two red flags right there. None the less, they led us in the right direction. Before embarking on the water trail, we realized it was essential we used a walking stick. Luckily, there was a walking stick store at the entry to the river. Just kidding. But, people nicely left behind a variety of sticks leaning against the canyon walls for other people to use. After equipping ourselves with sticks (we weren’t sure what the appropriate size was, so we pretended they were ski poles and went with what felt comfortable). For the next couple of hours, we learned how to correctly use our walking stick (and when used successfully, we managed not to face plant into the river) and gingerly stepped through various depths of water ranging from ankle to thigh deep depths. In case you were wondering, I wasn’t fearing for my life on this hike. That would happen tomorrow after our hiking boots (kind of) dried out. 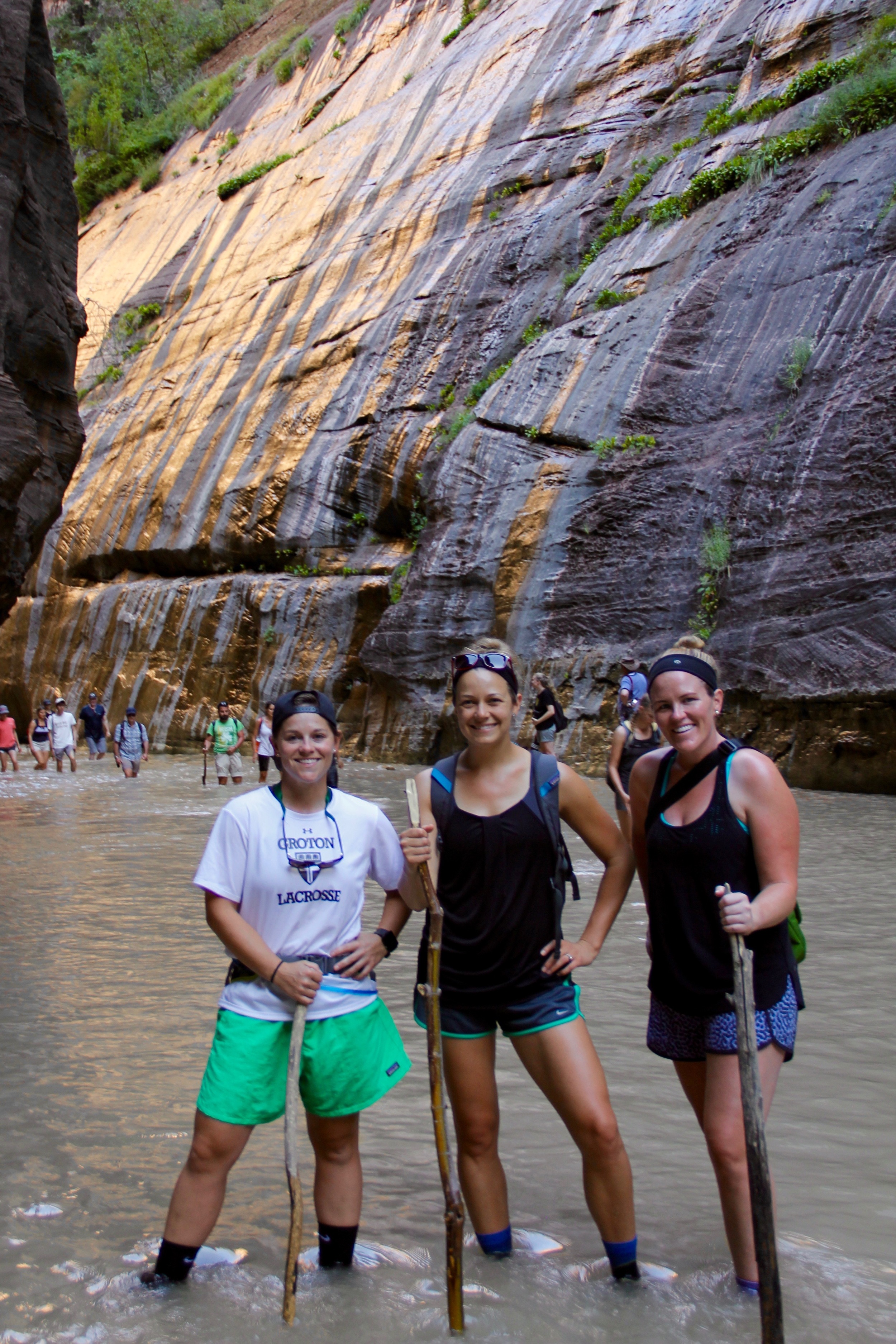 After returning from The Narrows, we retreated back to our campground. Unlike the previous night at Arches, we were forced to reserve a campsite at a private campground just outside the park’s perimeter because the Zion campground was full upon our arrival. While we were excited to have running water (including showers!), we were essentially pitching our tent in the backyard of a trailer park (I wish I was kidding…there were trailer homes just beyond the fence that marked our territory). The sites were so close together that I could hear the dad in the tent next to us snoring. Due to the heat and cramped quarters, we decided it was best to get up early, pack up our site, and head back to the park to do the Angel’s Landing hike before it got too busy and too hot.

It’s always comforting to read a sign that says, “since 2004, six people have died falling from cliffs on this route” before beginning a hike. In fact, it literally stops you in your tracks and makes you contemplate your life for a moment. Then, you decide to follow your two friends and live in the moment…and only regret that move about a dozen times in the next hour and a half. Now, I’m not usually scared of heights. I am, however, scared of heights when I have nothing preventing me from falling to my death besides my balance (which can be questionable at times). People weren’t kidding when they said you would be on a two foot wide path clinging to a chain at points of the trail. Luckily, I only experienced a visceral reaction of my knees shaking out of fear at one point on the hike, but my face had the I’m-not-enjoying-this-at-all look for pretty much the duration of our adventure. I constantly kept thinking:

a. I could easily fall to my death

b. this view better be worth it

c. when is this going to be over

d. shit, I’m going to have to climb down this ridiculous trail, so the torture is far from over. 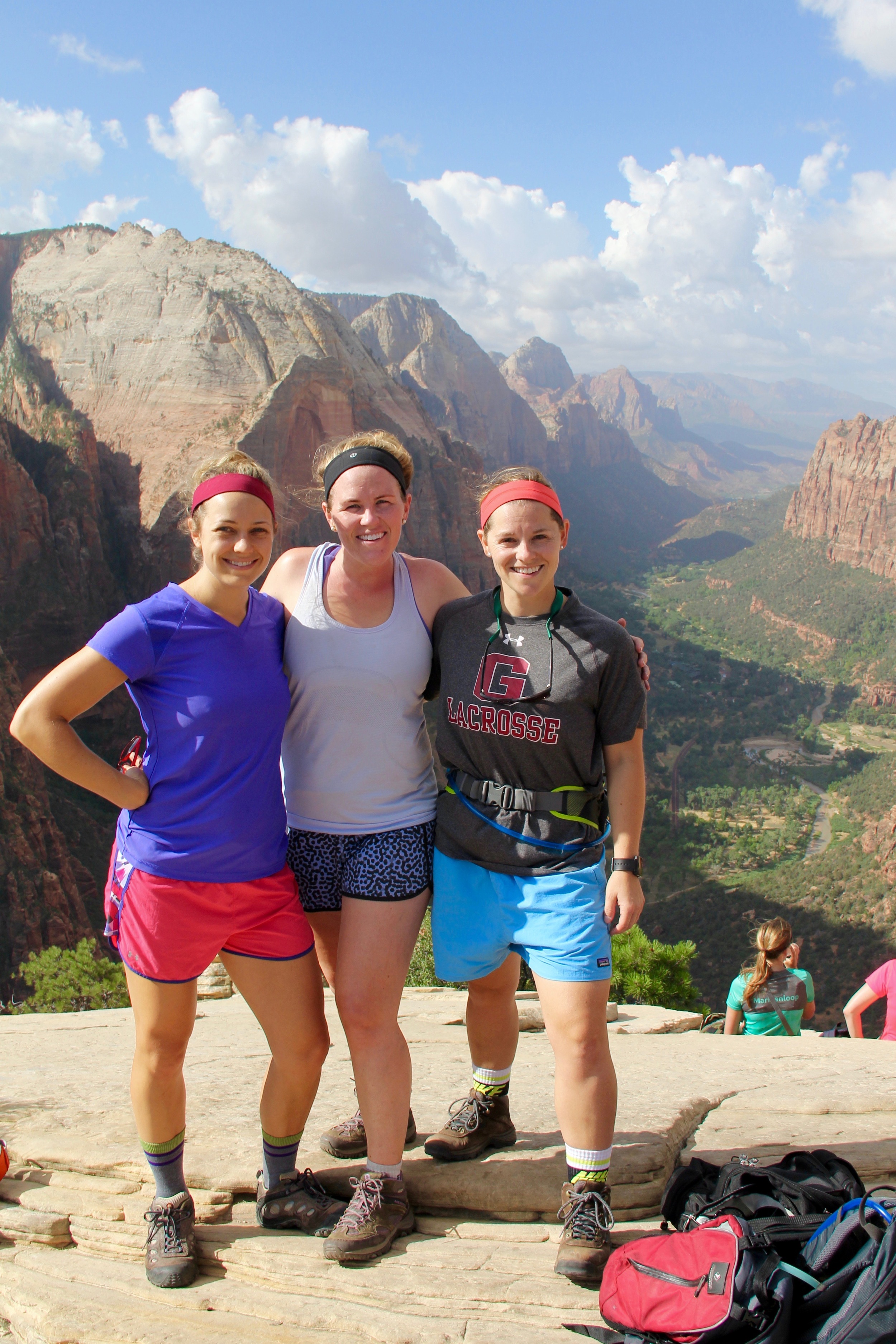 A wide stance at the top of Angel’s Landing to make sure we don’t fall off.

Needless to say, I’m alive to write this blog post. Let it be known that Randi and Kiley thoroughly enjoyed the rush of the hike, and their encouragement of “it’s only a little bit farther” (even when I knew they were lying to me) was much appreciated.

As we sat in a cafe for a post-hike coffee and breakfast and recounted our morning, the skies opened up. Like really opened up. Sheets of rain, flash flooding, quarter-sized hail. At first we were in awe, and then we realized how lucky we were to not be clinging to chains along the cliffs on the Angel’s Landing trail. Turns out, the storm caused the river in the canyon to flood, a rock slide ensued, and the park closed down. Talk about good timing on our behalves (by sheer luck). 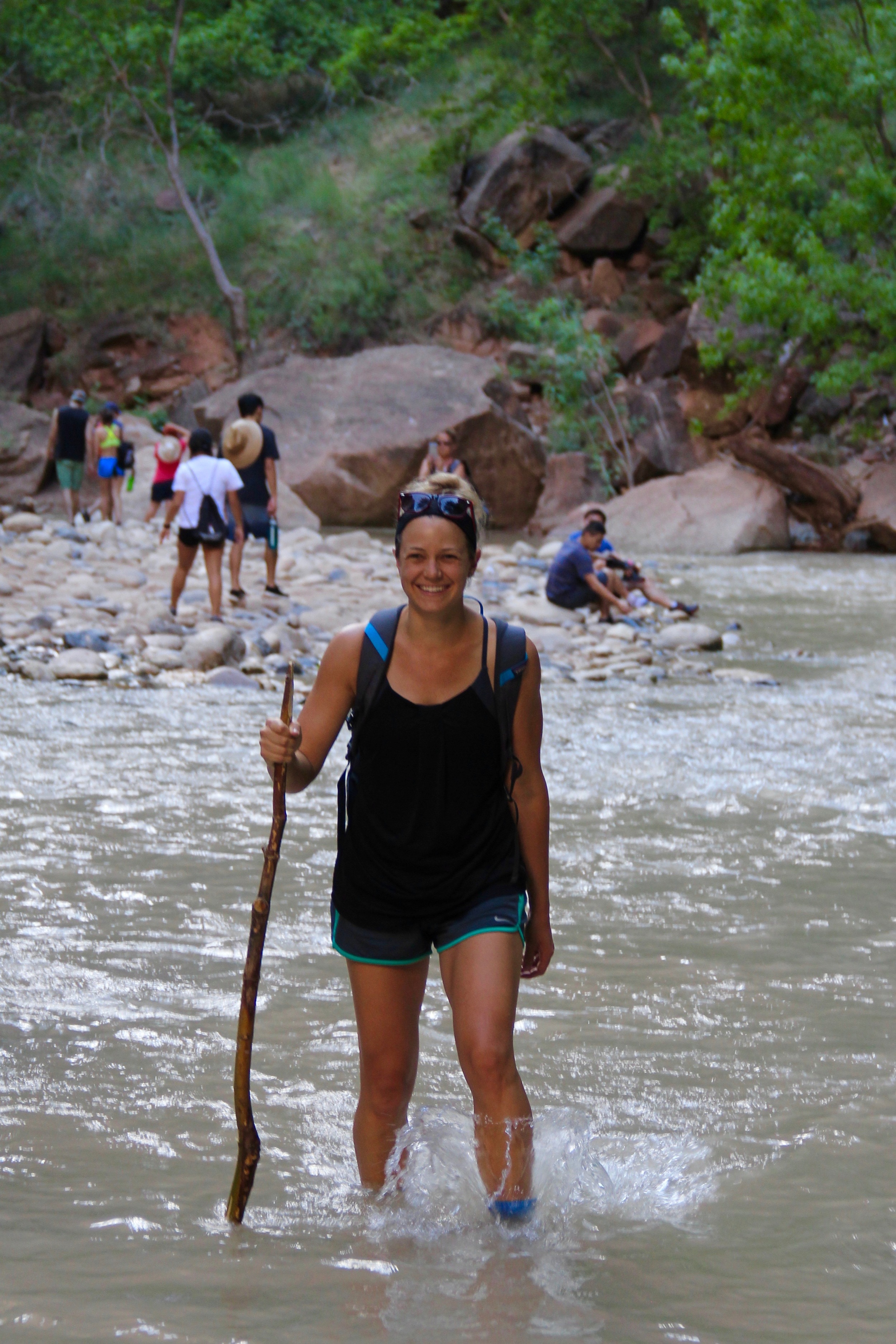 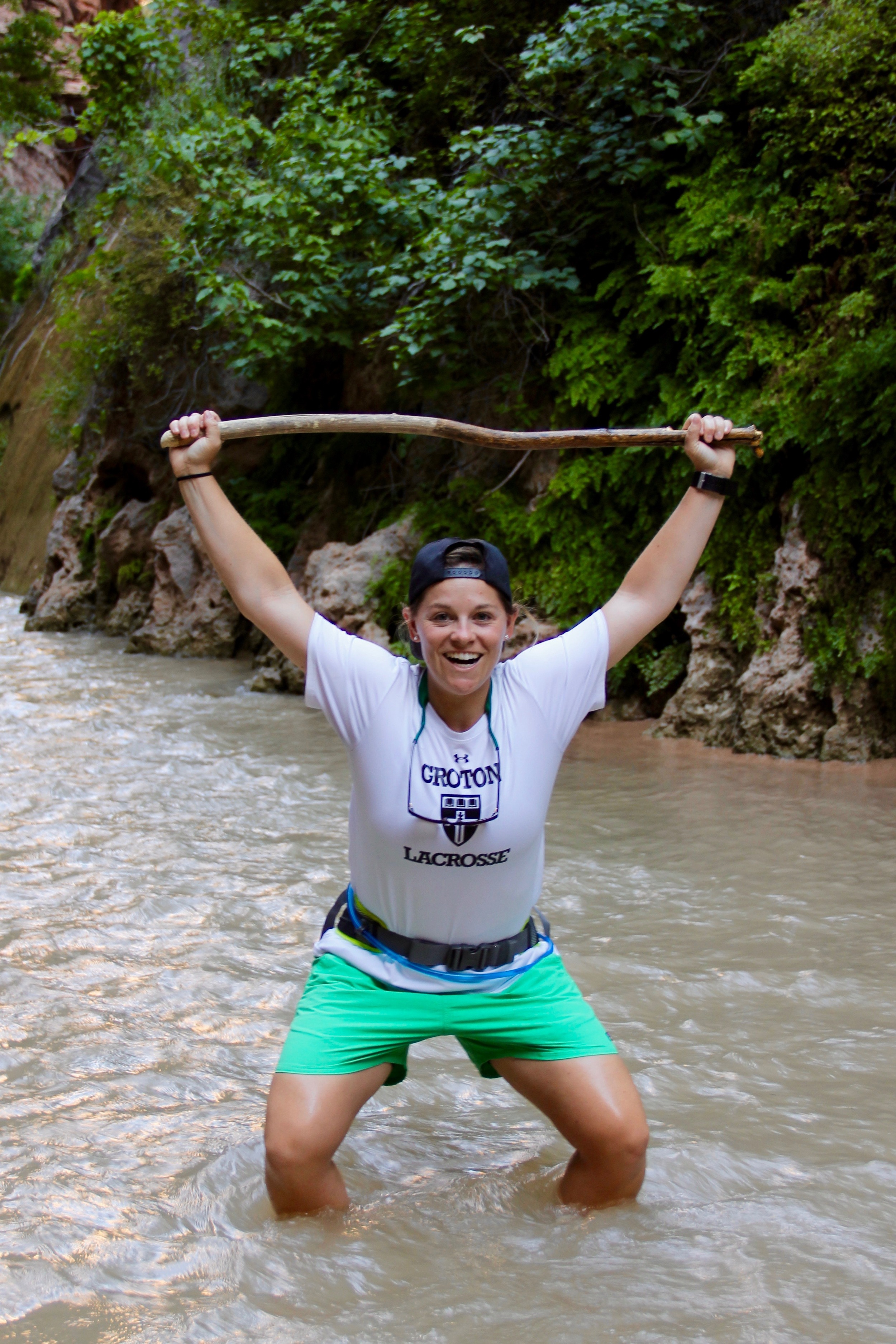 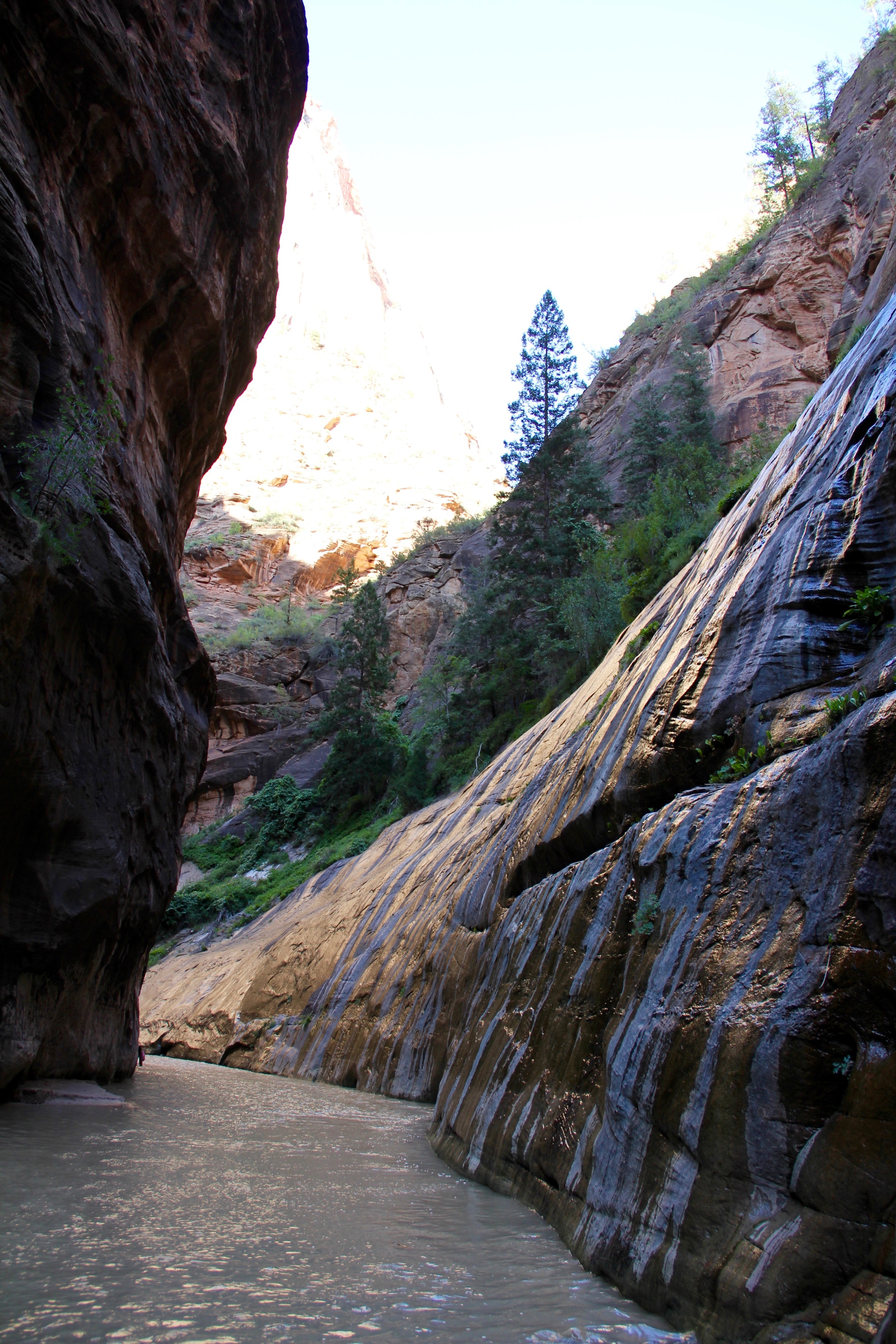 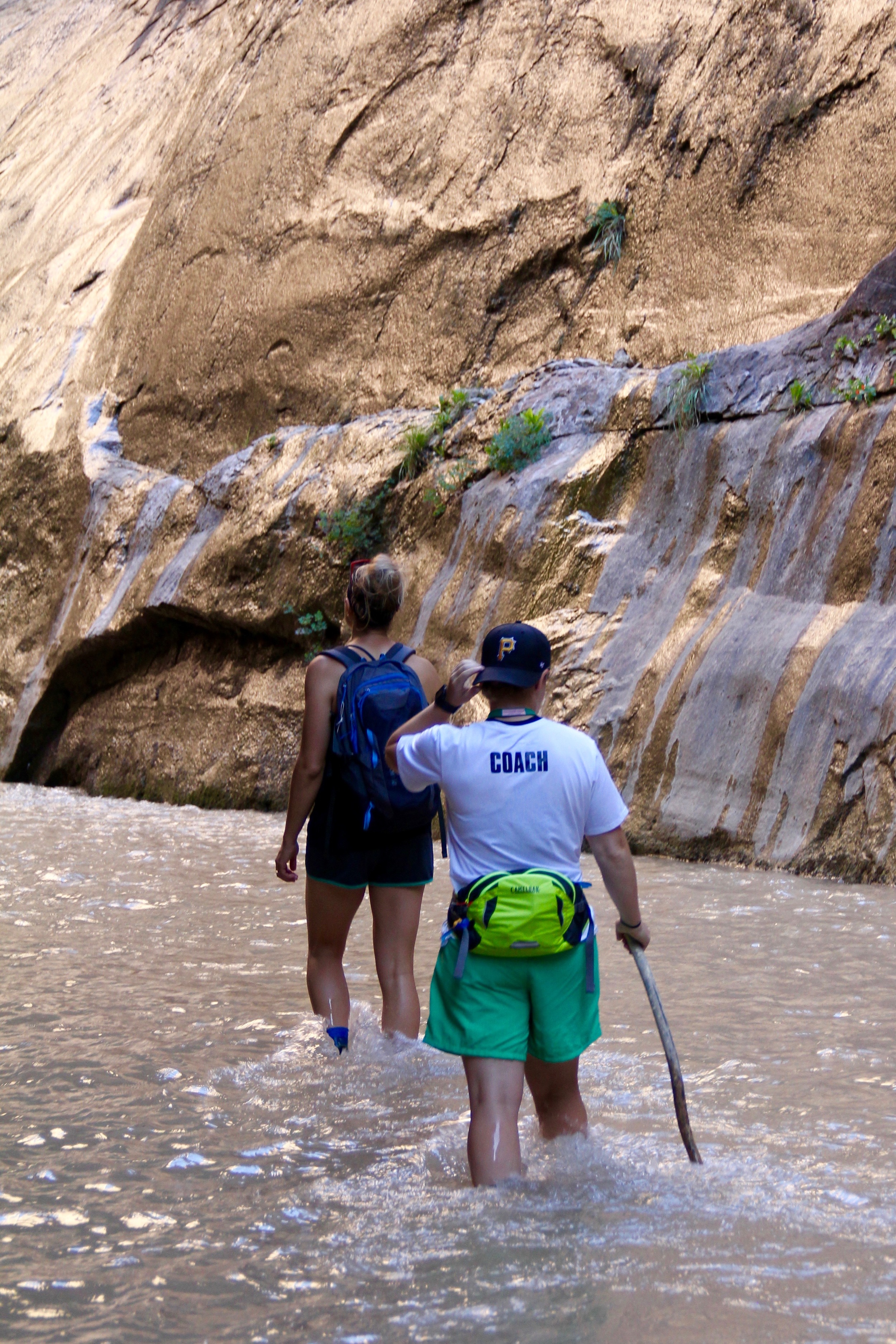 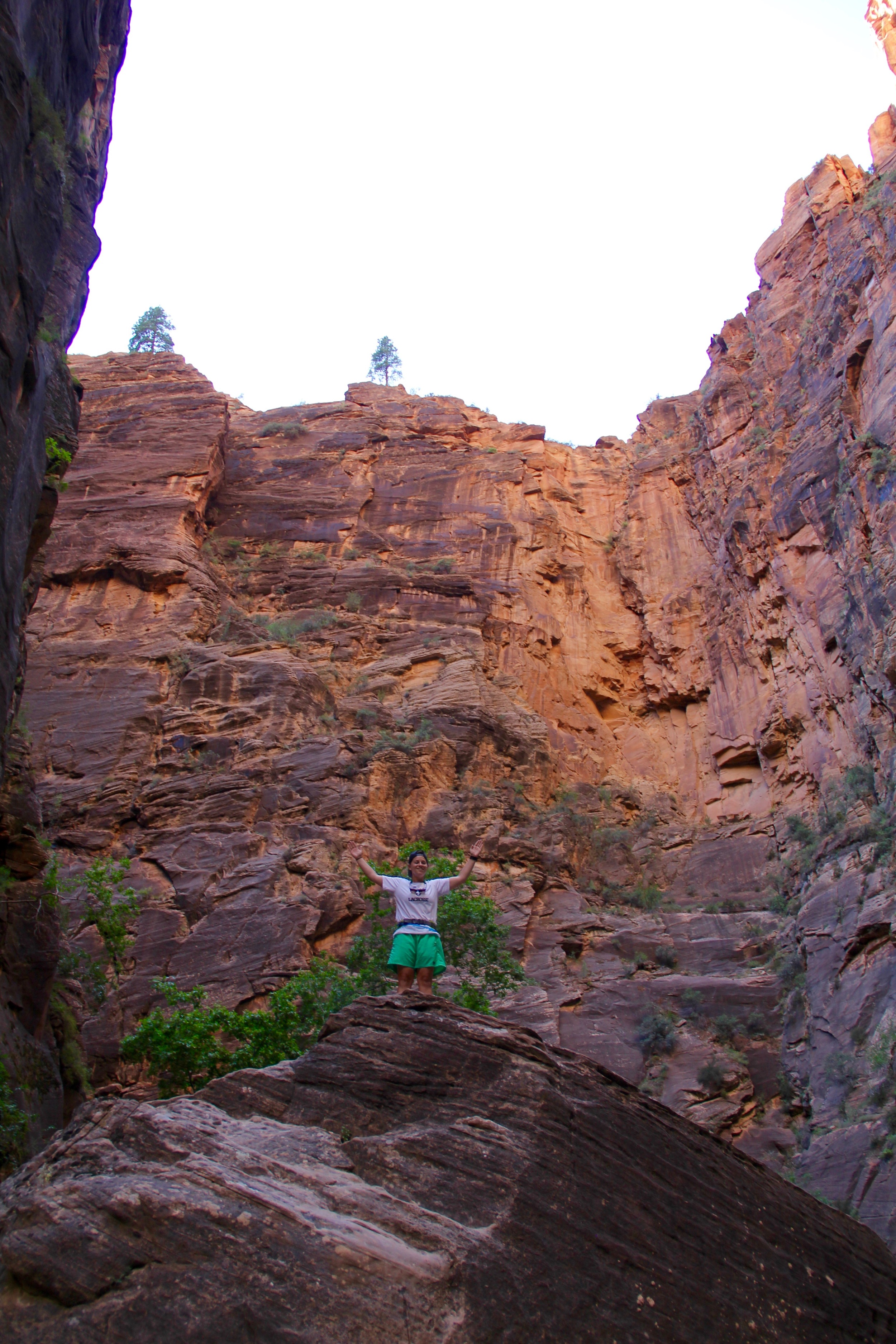 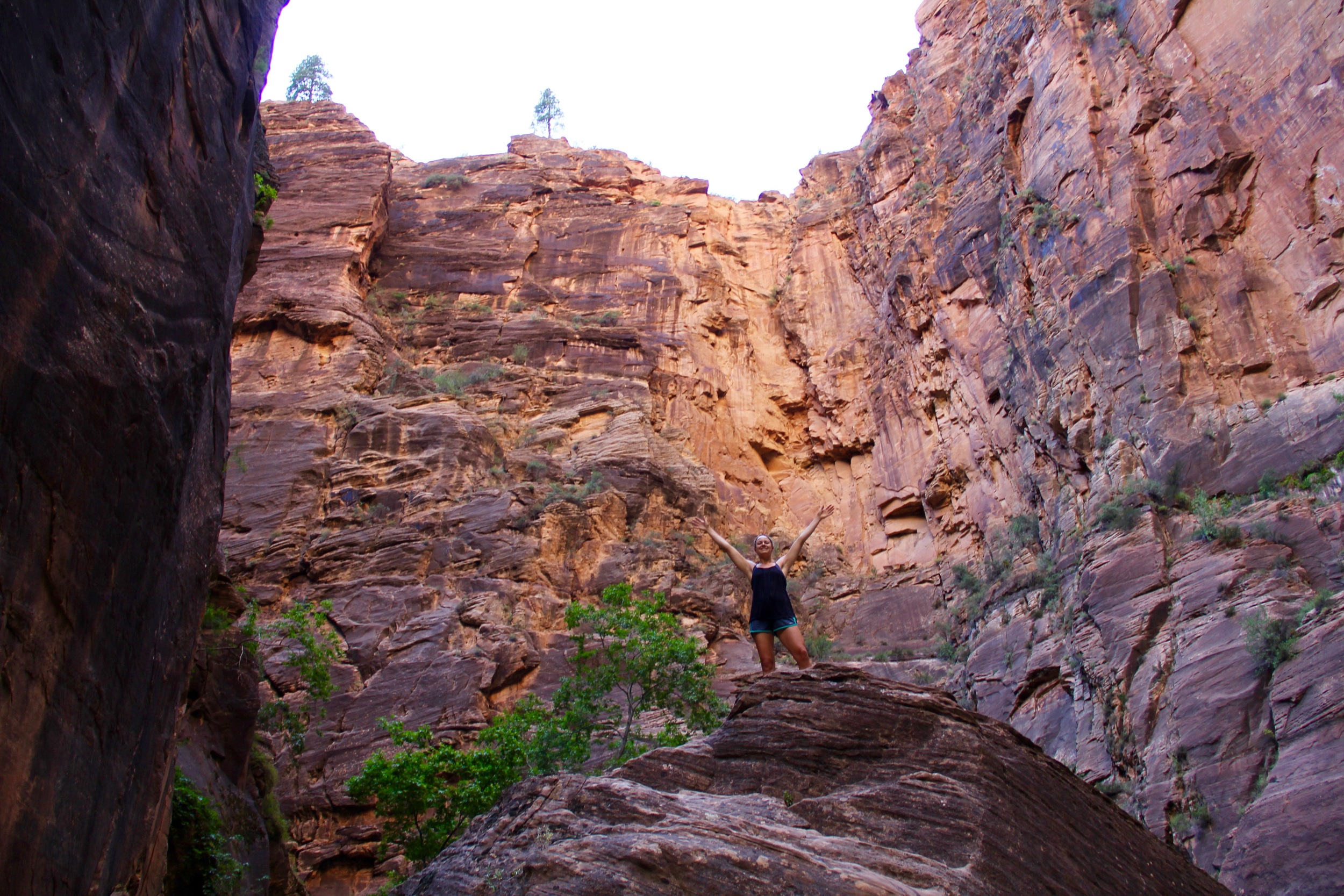 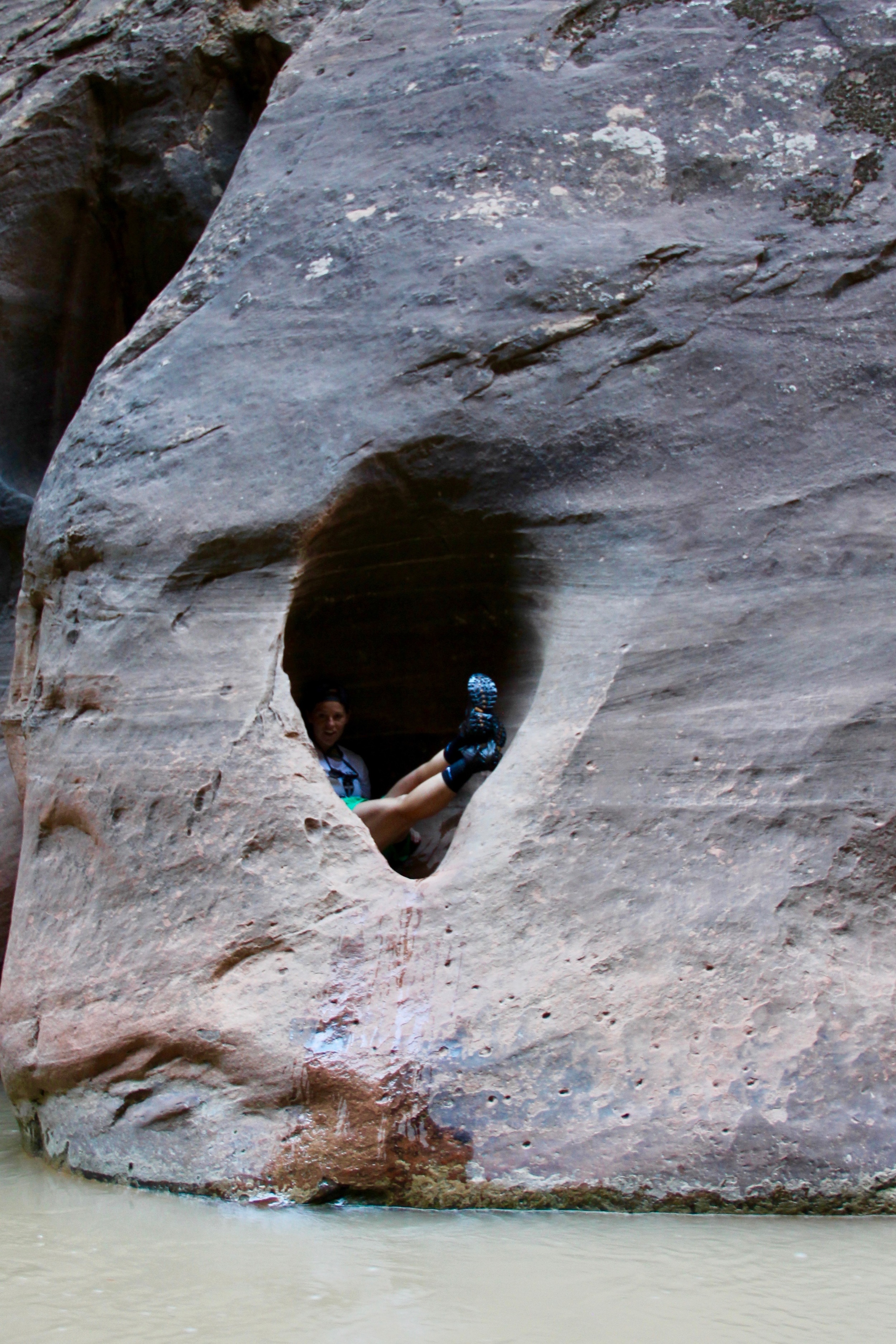 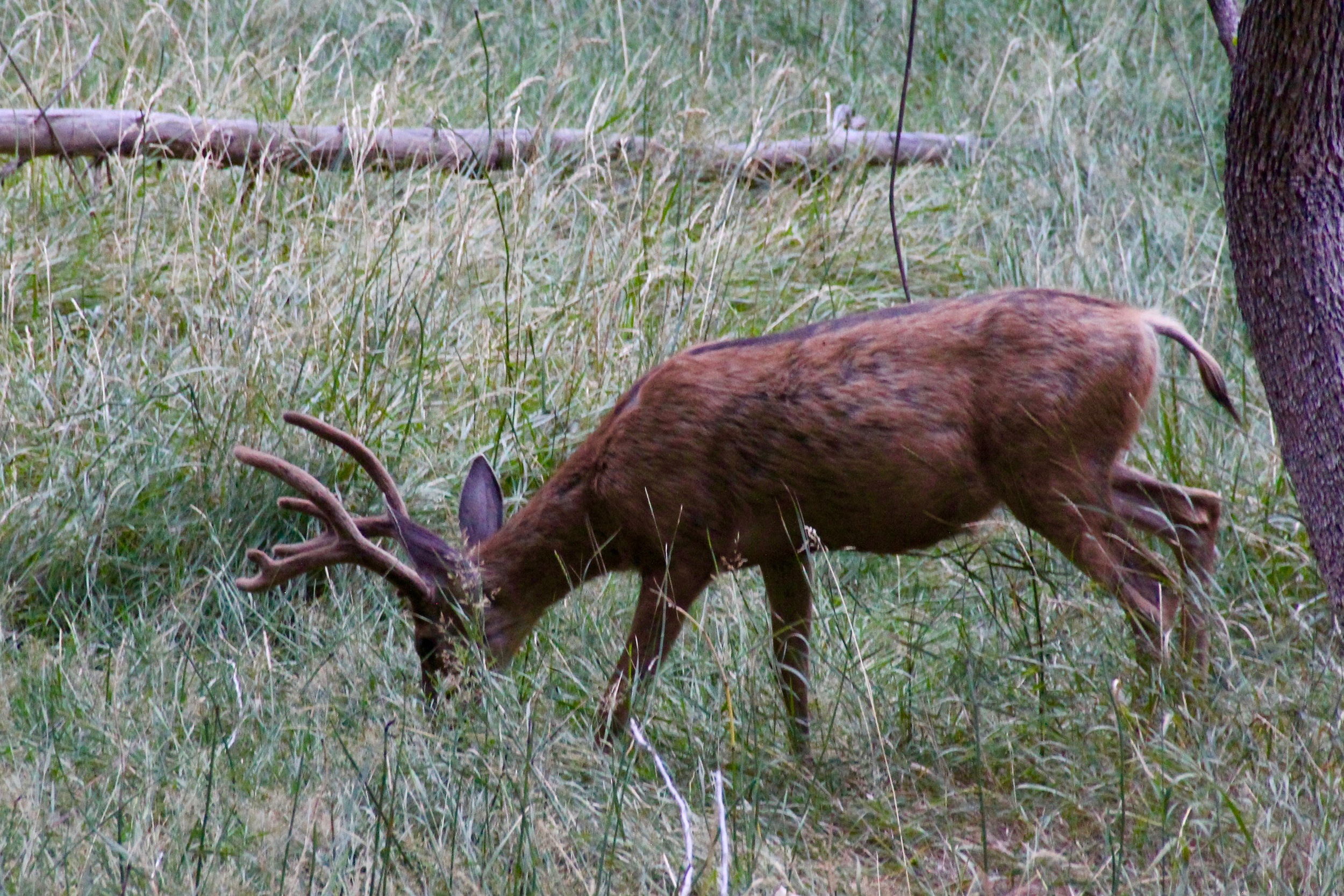 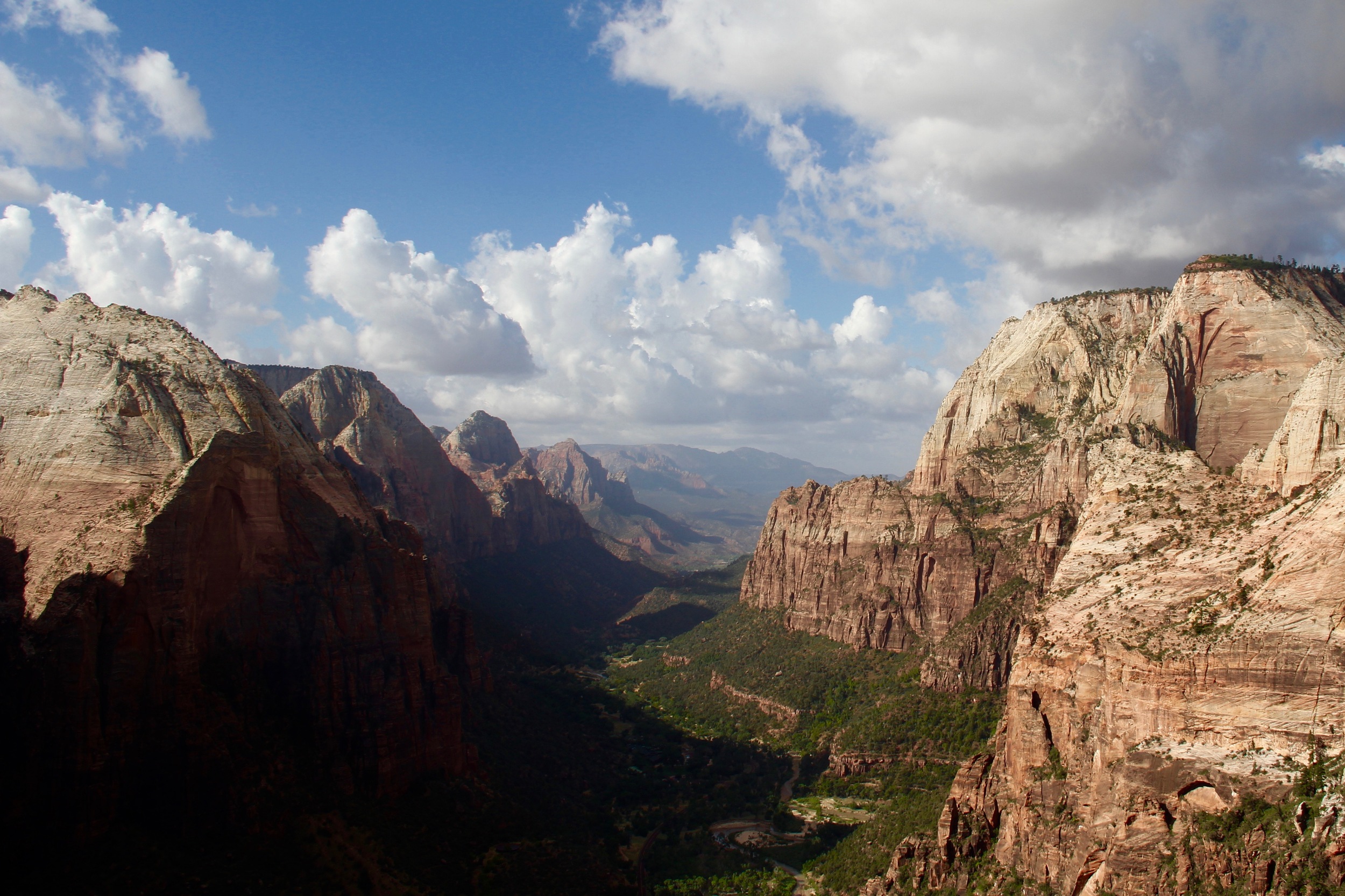 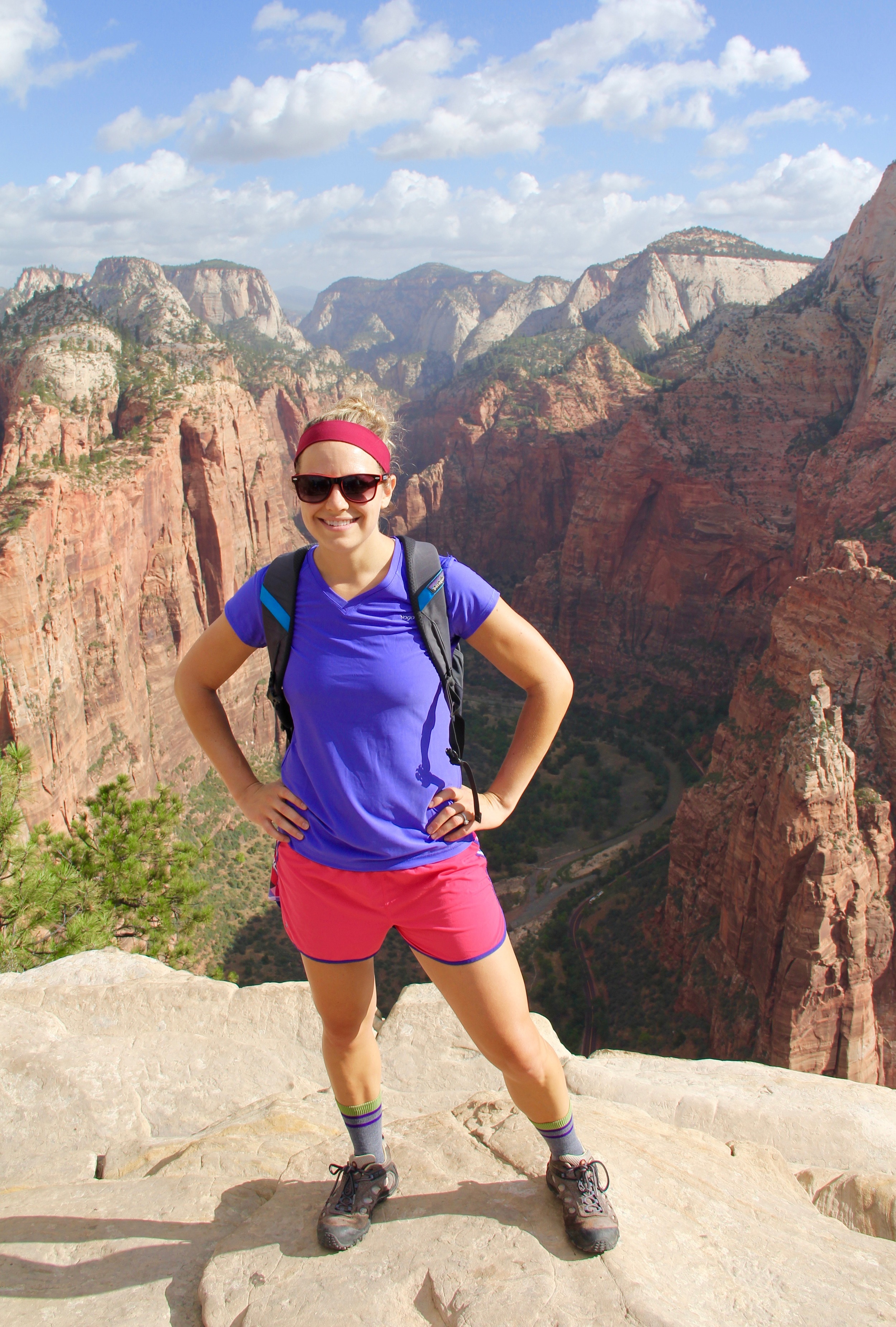 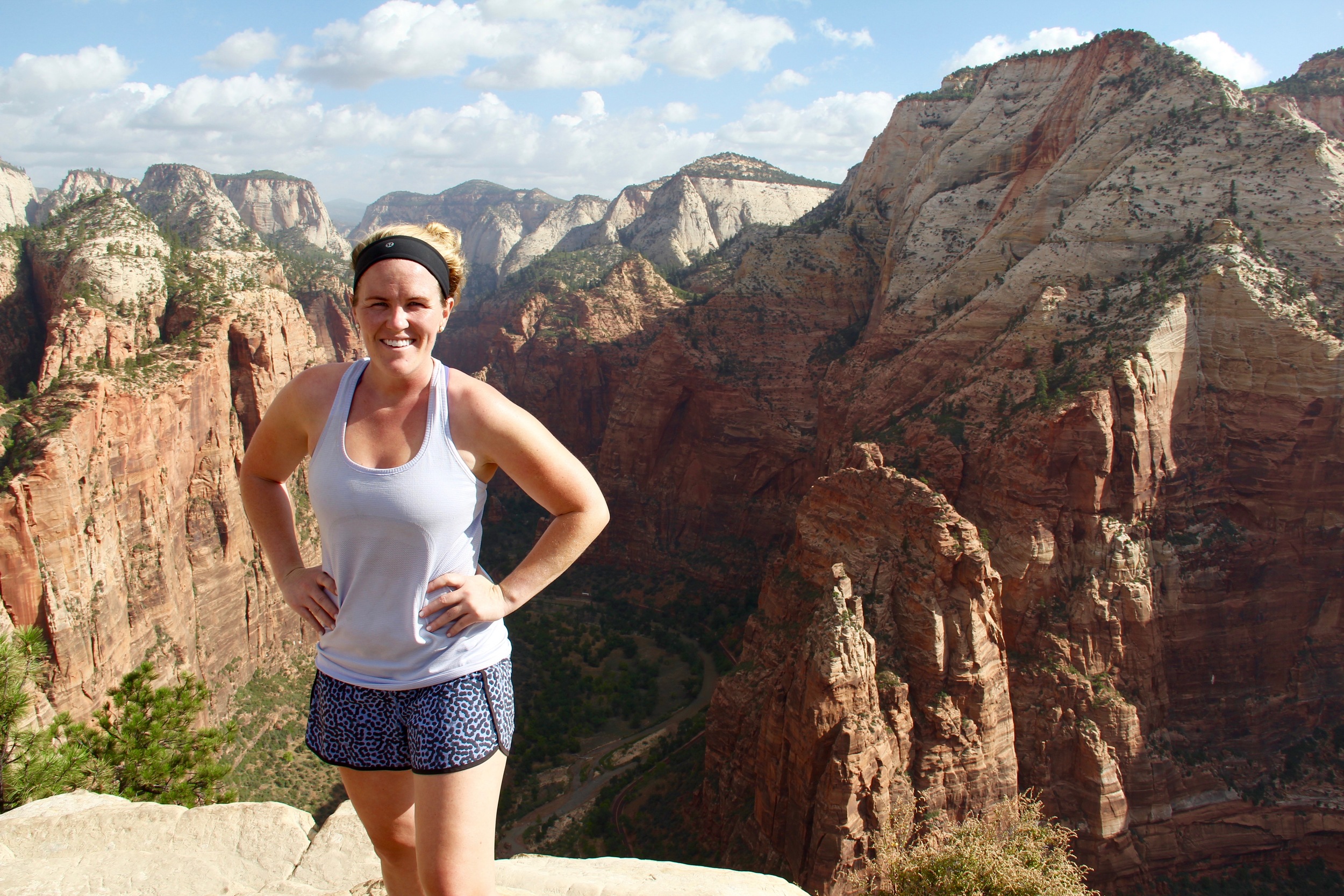 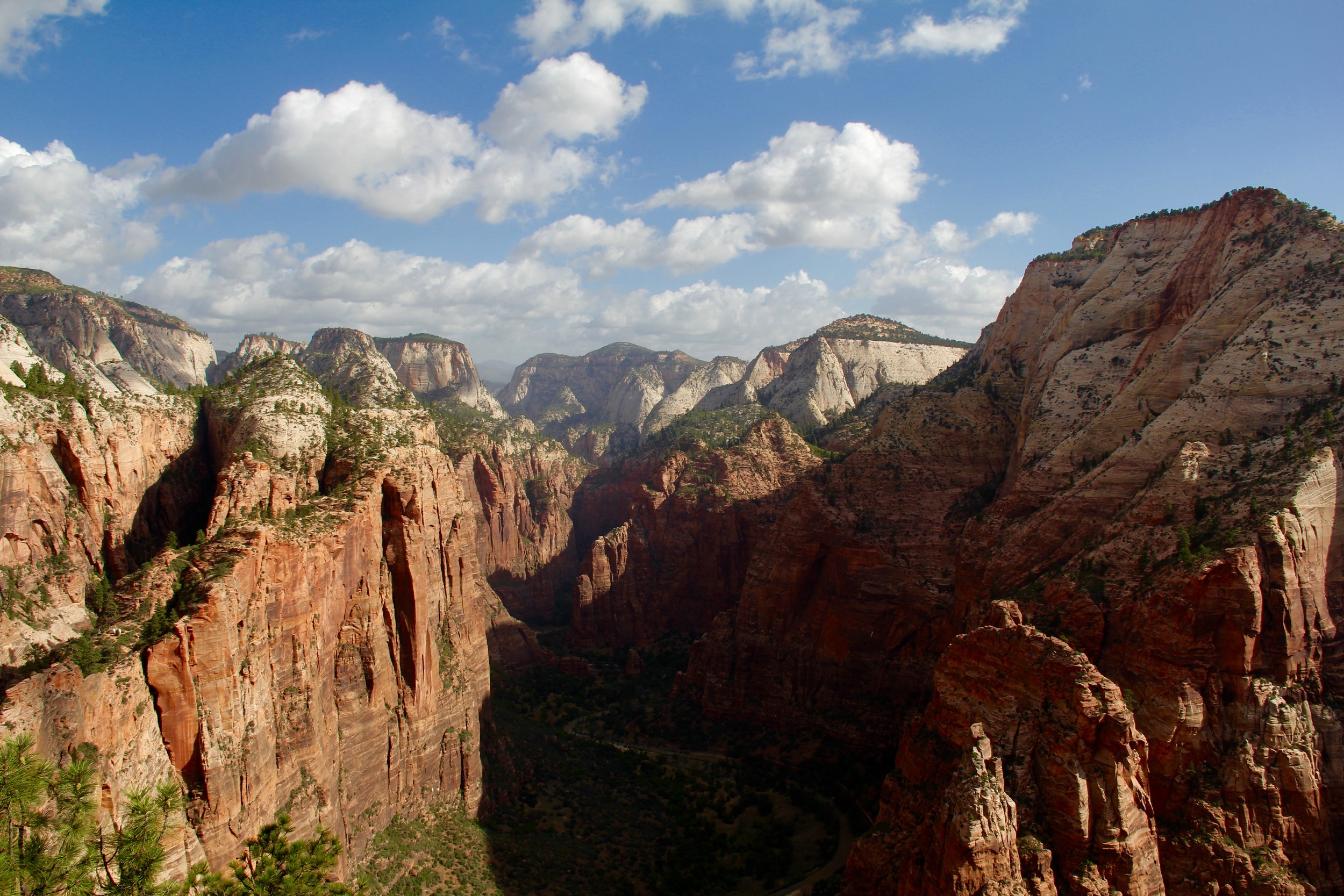 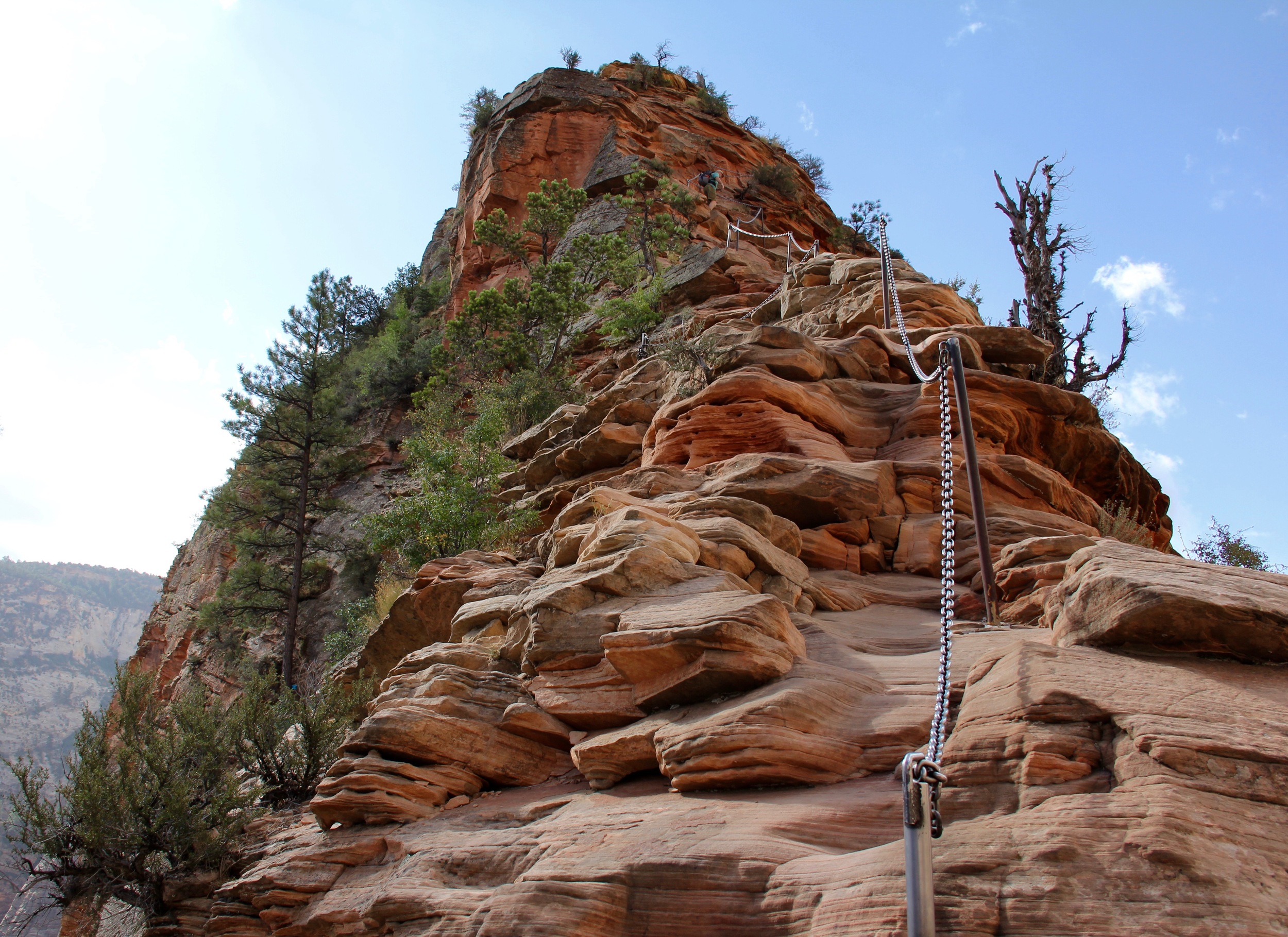 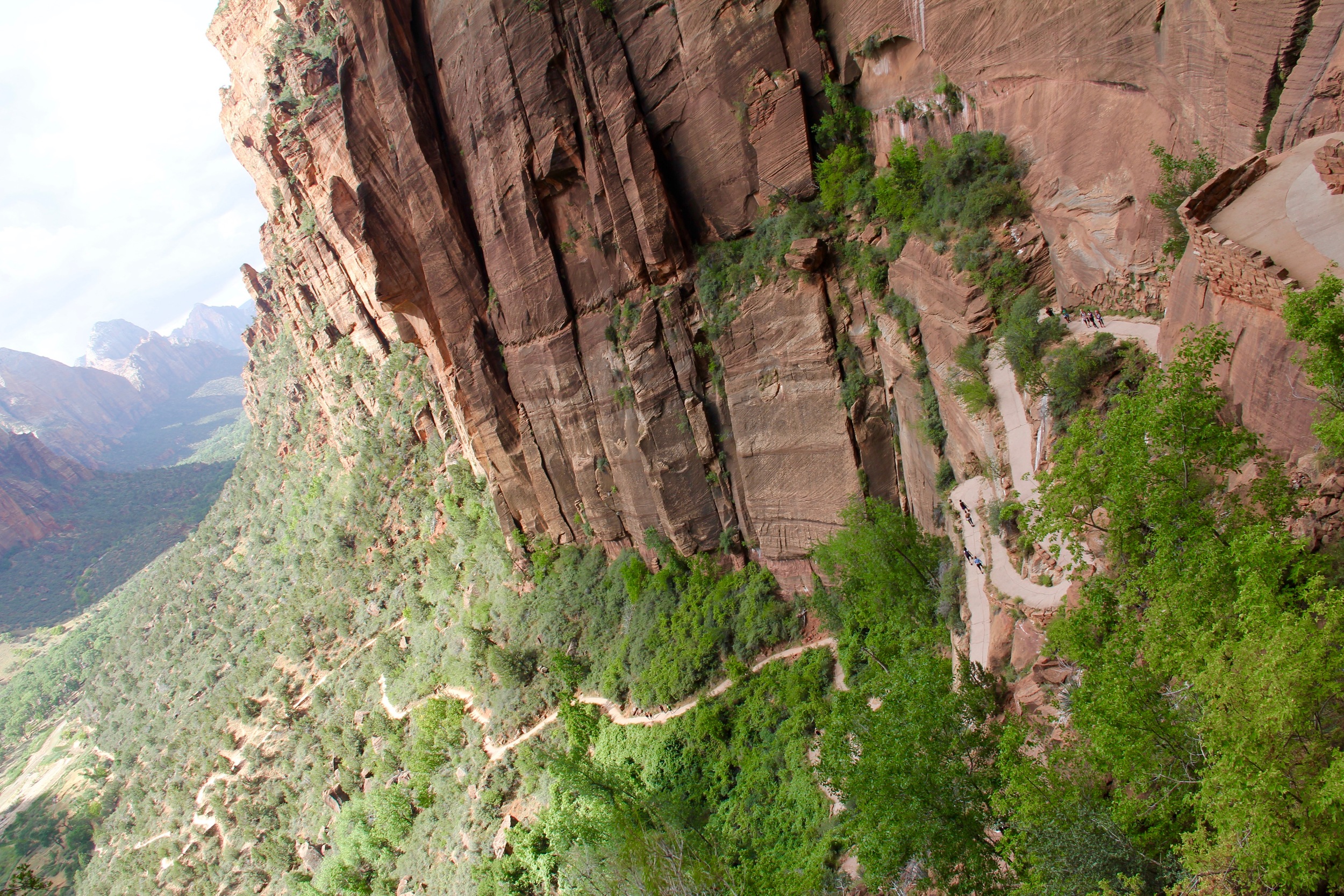