Author’s note: I’m sorry for the delay on this post. Not only did we leave Steamboat for the desert with limited wifi, but it was rather daunting to write one blog post that encompasses the fun we had this past weekend. So, here goes…

At a wedding back in June, I asked Abby if she was free at the beginning of August when I was thinking of passing through Colorado on a cross country road trip. I’m not sure if this question came up before or after we discovered we were on the Martha’s Vineyard ferry rather than the Nantucket ferry (our intended destination). Luckily, she didn’t judge my lack of direction and enthusiastically invited Randi and me to Steamboat despite having a trial on her calendar for the Monday we were scheduled to leave (which she won by the way…NFG).

What resulted? An epic weekend in which three New Englanders fell in love with Colorado almost instantly.

Side note: you might have noticed we picked up a traveler. About three weeks ago, I proposed to my friends from home that they fly in and meet Randi and me along this trip. Traveling west to Utah was on Kiley’s bucket list, and with very little hesitation, Kiley booked herself a plane ticket to Denver to join us for the Steamboat, Arches, Zion, and Grand Canyon legs of our adventure.

After picking Kiley up from the Denver airport on Friday morning, we headed to the city to enjoy some breakfast and catch up over lattes before heading for the mountains. Our drive through the Rockies was marred by rain for most of the way, but we were still in awe by the landscape surrounding us. Shortly after arriving at Abby’s apartment in the heart of Steamboat, we walked to dinner at Low for a southern-style tapas meal. For those of you wondering, Abby is another hockey teammate and close friend from Middlebury who grew up in Denver and is now a public defender in Steamboat. We were in the same class and actually met while on a recruiting trip to Bowdoin (clearly we both decided against matriculating at Bowdoin). Over the years, I’ve learned two things: lifelong friends are made on teams–hockey especially–and the hockey world is small. Case in point: Randi randomly connecting with one of her closest prep school teammates, Dani, while in Steamboat. Dani and her family rolled into Low just as we were sitting down to order and greeted us all with open arms. The rest of the weekend resulted in multiple run-ins with Dani’s family, including a post-rodeo spontaneous 29th birthday celebration at the request of Randi’s requirement for a late-night pastry post-bar. (For those of you with a minute or two to spare, Google Dani Rylan. She’s pretty badass. She started the first professional women’s hockey league in the US). Our first evening in Steamboat consisted of one belly laugh after another, and we couldn’t help but notice how tired our abs were as a result.

The initial plan for the weekend was to hike and camp in the mountains surrounding Steamboat with Abby, her boyfriend Dimitry, his 7-year old daughter Maya, and some of her work friends. Instead, Abby suffered a biking injury on her way home from work Thursday evening (don’t worry, nothing about the weekend was compromised except for Abby’s right knee). That coupled with the fact that the forecast didn’t look promising, our plans needed to change. Fear not. Plan B for the weekend may have excited us more than Plan A.

Saturday started off with two of our favorite things: a good coffee shop and a farmer’s market. After indulging in cinnamon bun the size of Randi’s head at Winona’s, we explored downtown Steamboat. Our afternoon took us into the mountains surrounding town to the natural hot springs, which presented us with an amazing people watching opportunity. Over the course of the day, our anticipation for our Saturday evening plans only grew with excitement. A rodeo wasn’t on our road trip bucket list, but when we were presented with an opportunity to attend, how could we say no?! After returning from the hot springs (which in addition to be a pretty cool natural feature also proved to have healing powers for Abby and Randi’s bodies), we pulled together our best outfits based on the clothing we packed: Canadian tuxedos. 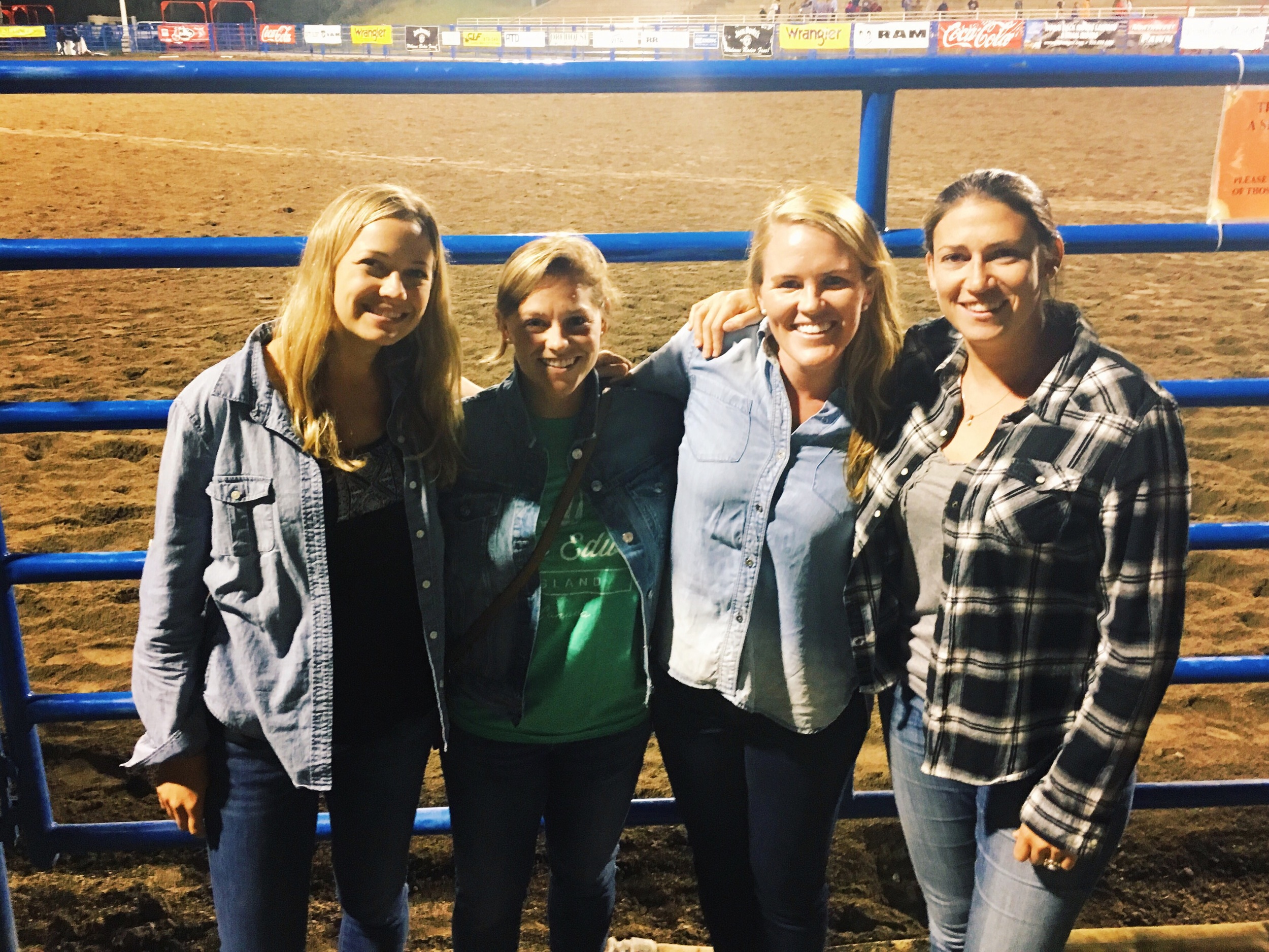 Now, this was our first rodeo (and we’re pretty excited to actually be able to say “this ain’t our first rodeo” afterwards and actually mean it). We had no idea what to expect, and the rodeo did not disappoint to say the least. From the overly patriotic national anthem to the 6-year old barrel racer, we were completely in awe for the full two hour event. This awe was rooted in both the fact that we had never seen anything like this before but also because this is a normal life for people out here in the west. The first event consisted of someone literally getting trampled by a bucking bull, which was painful to witness, and pure shock at the amount of shit caked to the bull’s ass as he did it (we’re somewhat embarrassed to say that we had a light bulb moment of where the term “bull shit” comes from…). One would think cowboys in frayed chaps being bucked from bulls or jumping off of their horse and onto a calves’ back to see how quickly they could hog tie it was the highlight of our rodeo experience (and there was more than one occasion where we thought the calf was dead, but, alas, it perked to life…and it’s neck wasn’t snapped like our initial thought. As Dani, former ram scrambler herself, warned, “this isn’t exactly a PETA approved event”). Nope. Instead, it was the audience participation that really got us. Parents willingly (and who knows, perhaps they were excited and eager to do this) sent their children down into the shit-filled dirt ring to see their twelve and under kids participate in the rodeo. The older kids were challenged to rip a ribbon from a fleeting calf while the five and under tots unsuccessfully chased a sheep around the ring trying to catch it. The ram scramblin’ event proved to be the most memorable as we watched individual kids (purple sweatshirt girl in particular) completely eat it (and probably shit). In the words of Dani, the purple sweatshirt girl “skull planted” as she went forehead first into the kid in front of her as she tried to be the first taking off for the sheep. 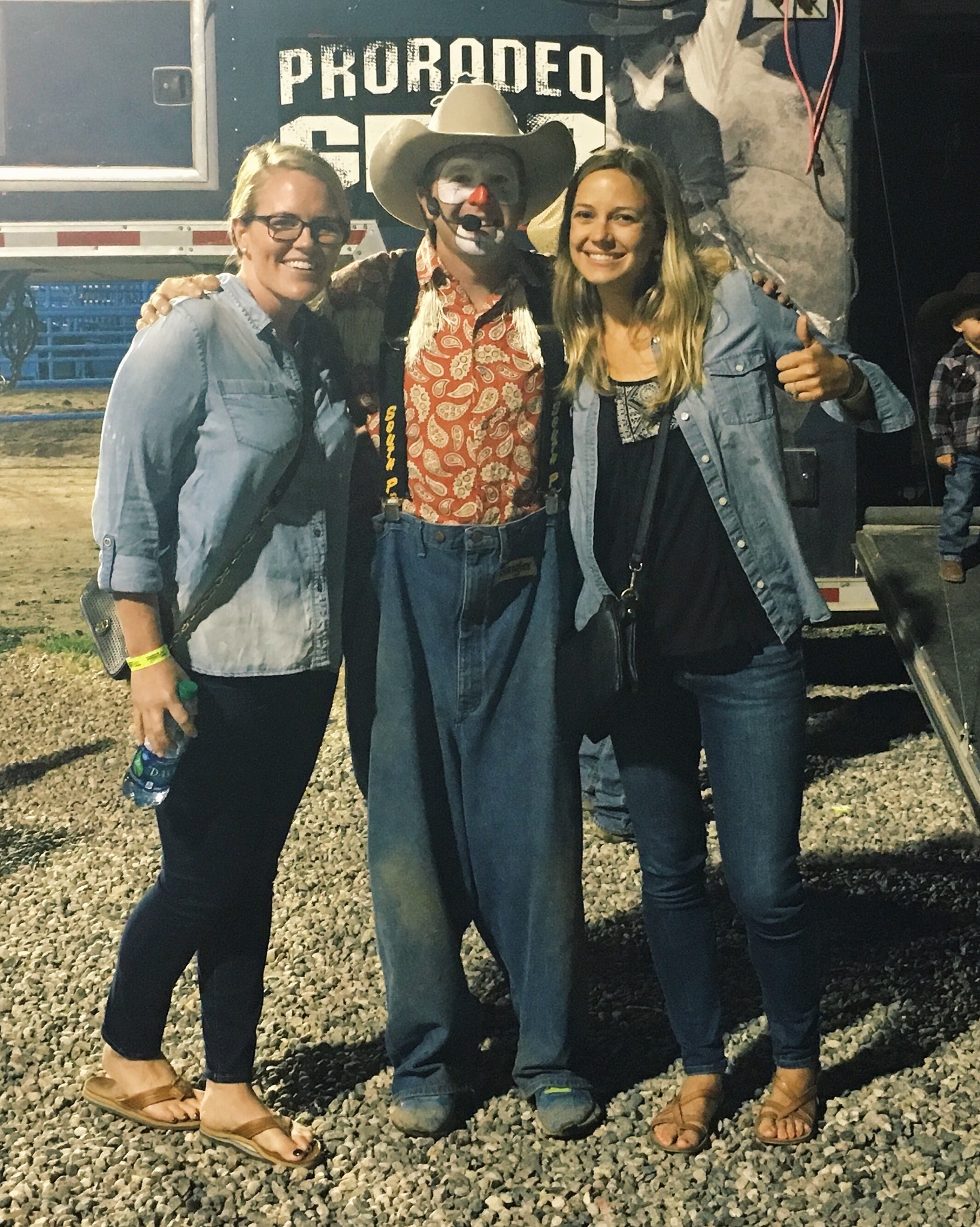 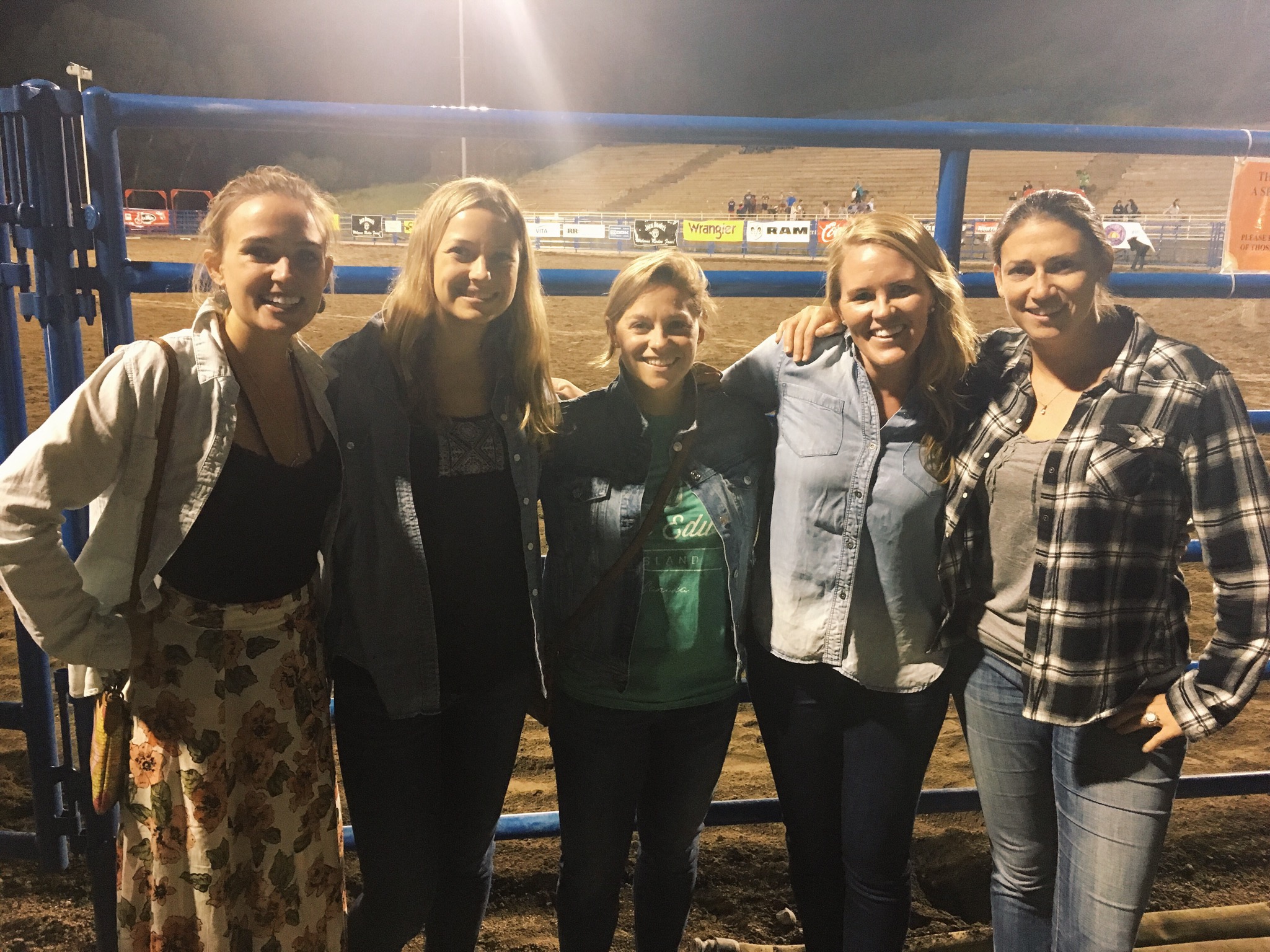 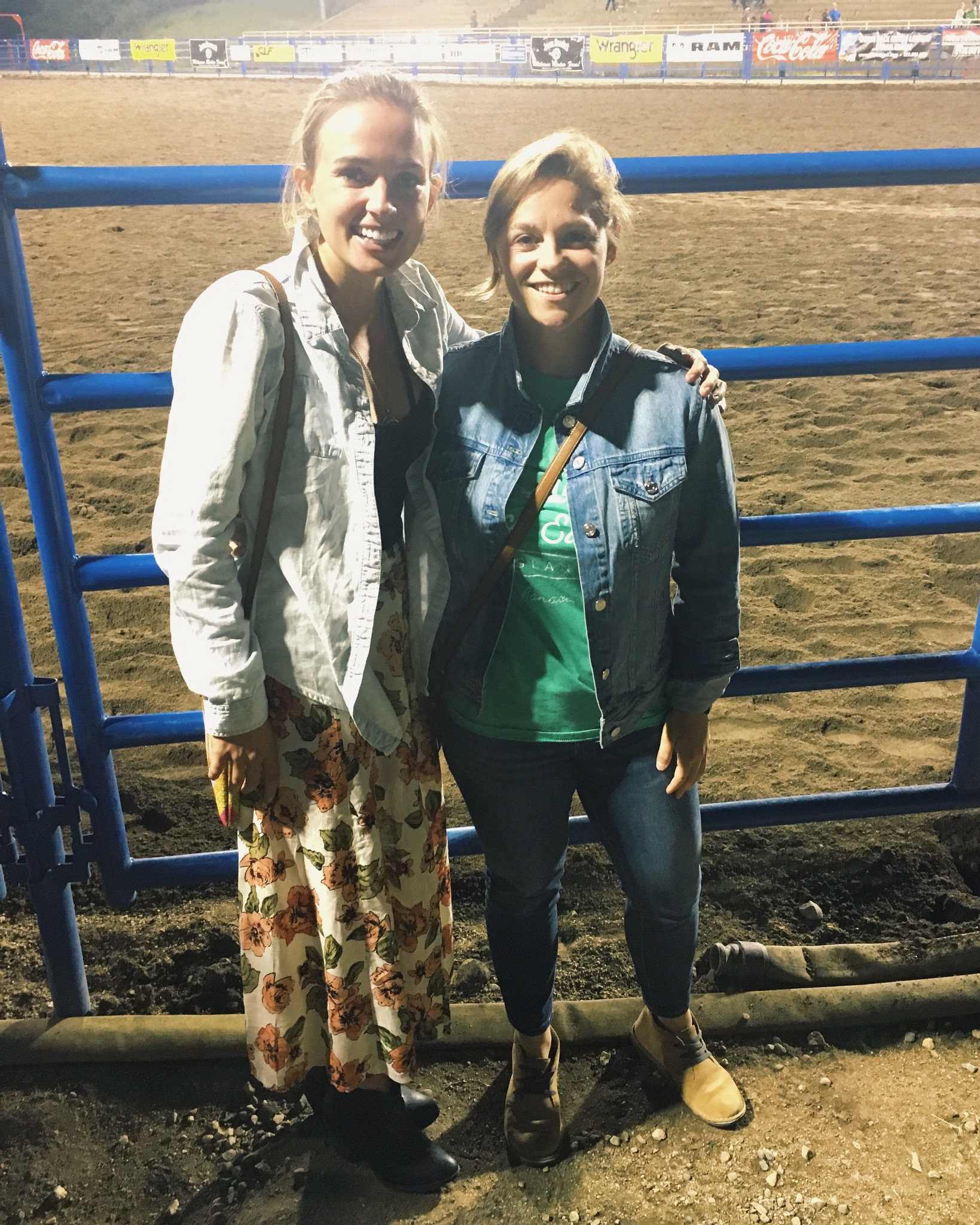 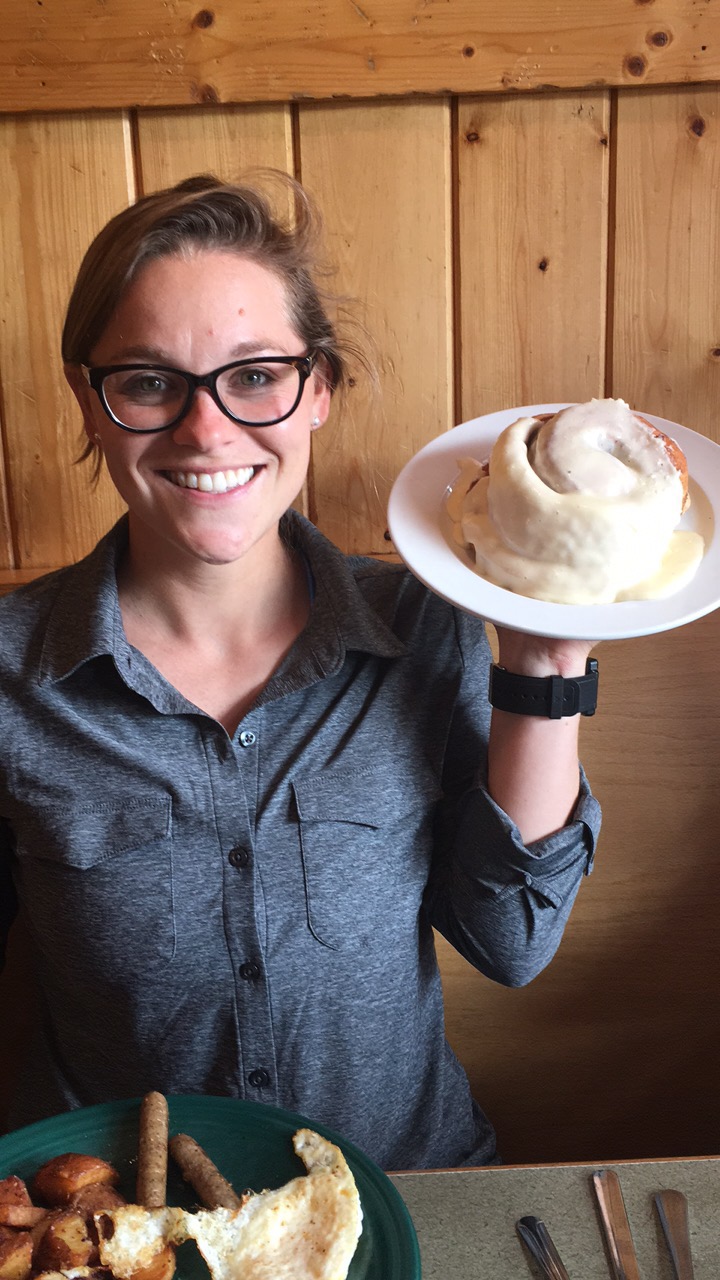 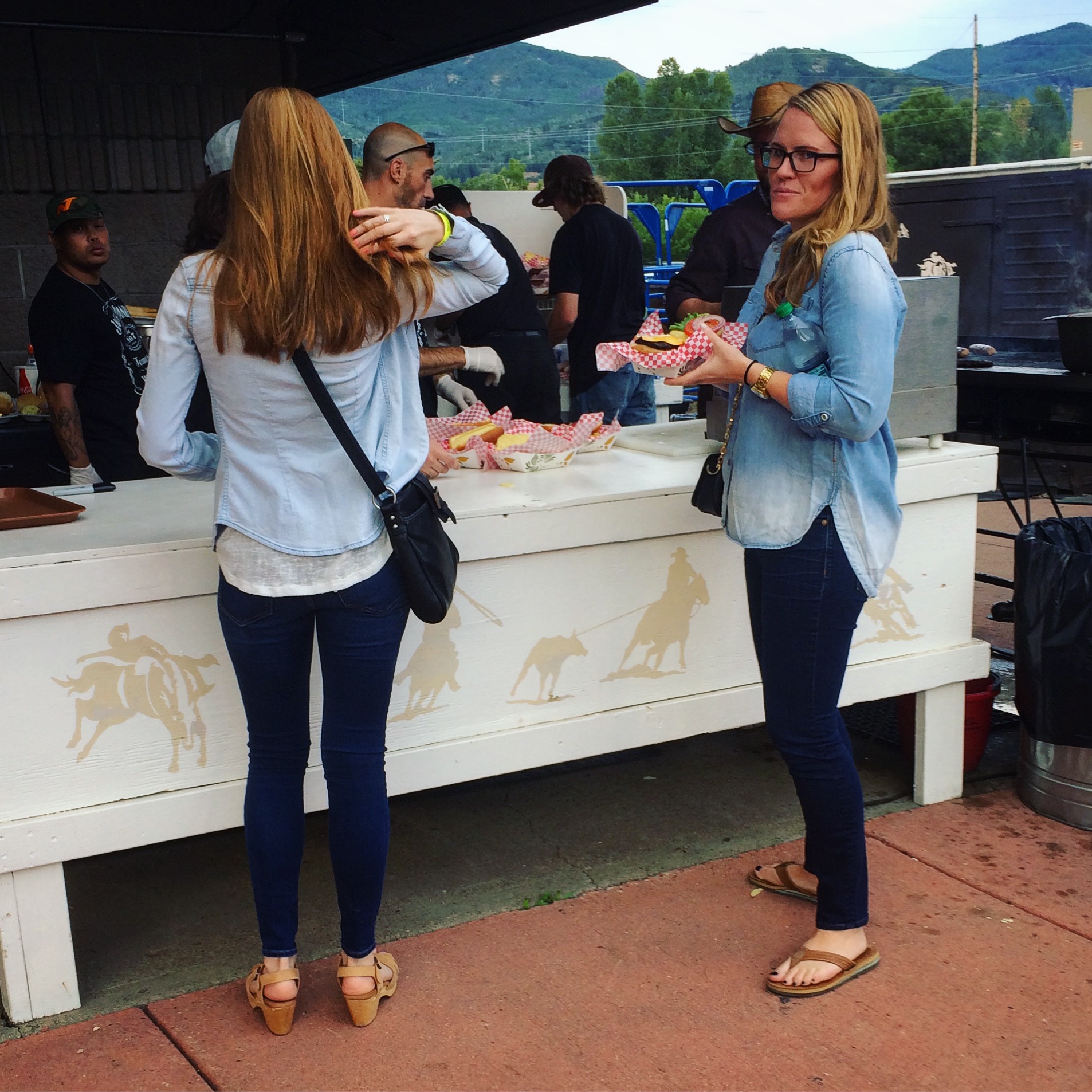 Sunday ended up being a pretty low key day, which we all needed after Saturday evening’s excitement. We started our morning with brunch at Paramount at the base of Steamboat’s resort. Afterwards, we took the lazy-man’s way up the mountain via the gondola to explore some of the terrain and daydream about what it would be like in the winter time. On the hierarchy of physical activity in Steamboat, we were at the lowest of the low going for a walk on the cat road. Dmitry road his bike up the mountain to meet us and serve as tour guide, his sister and her boyfriend joined us for a drink after their own biking excursion, and we ran into Dani and her boyfriend after their own biking adventure. Needless to say, we were feeling a little bit like stagnant out-of-staters who just wanted to enjoy a pretty view on a beautiful Sunday afternoon. After our lack of strenuous exercise resulted in a strong desire for Bloody Mary’s from everyone but me, we headed to the gondola to descend down the mountain. Much to our surprise, our trip down proved to be anything but smooth as we found ourselves screeching to a halt and dangling from the cable wires for an unexpected 25 minutes with no information as to why it stopped abruptly on such a beautiful day. The heat coupled with the need for the bathroom by some of us resulted in the running through of worse-case-scenarios. 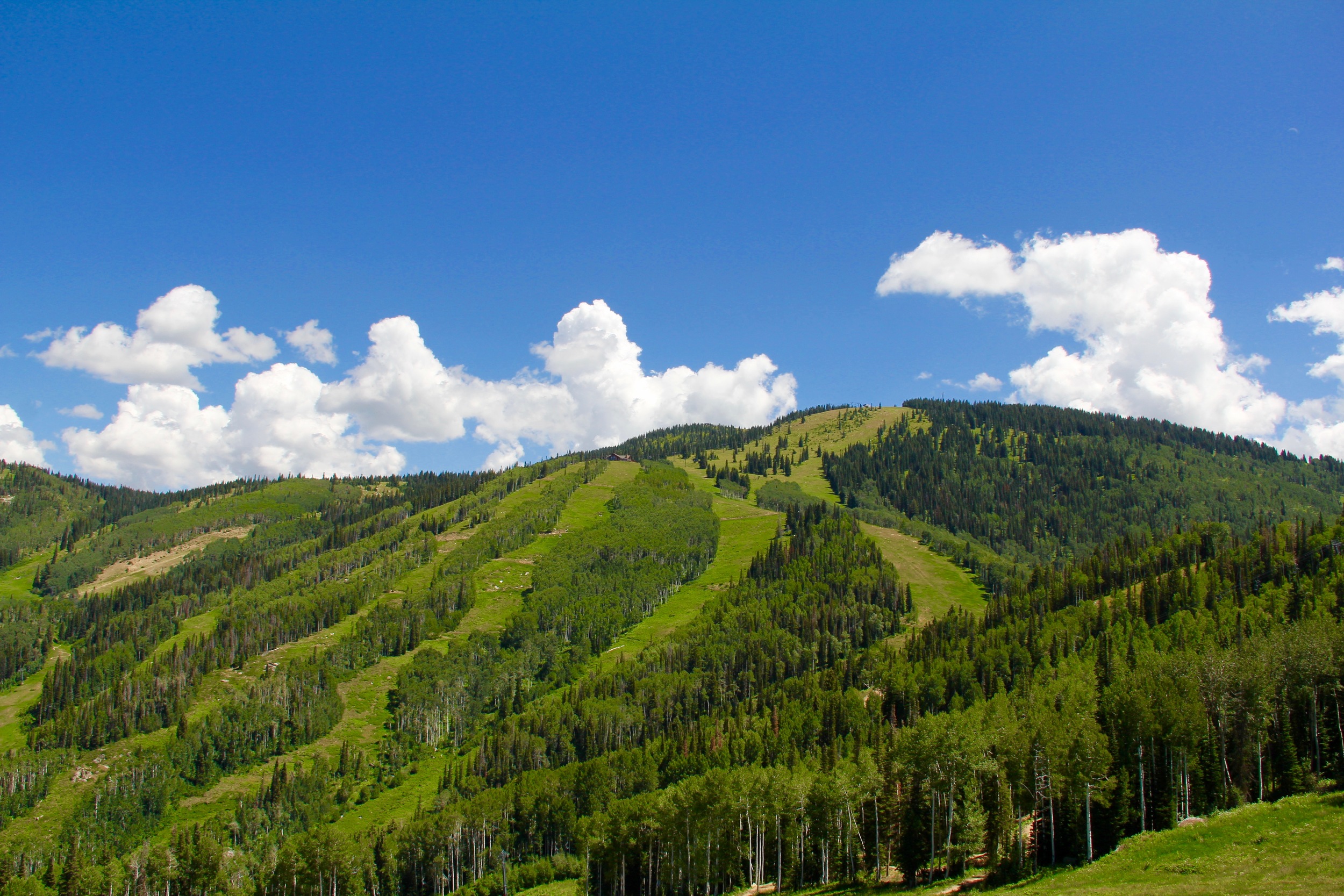 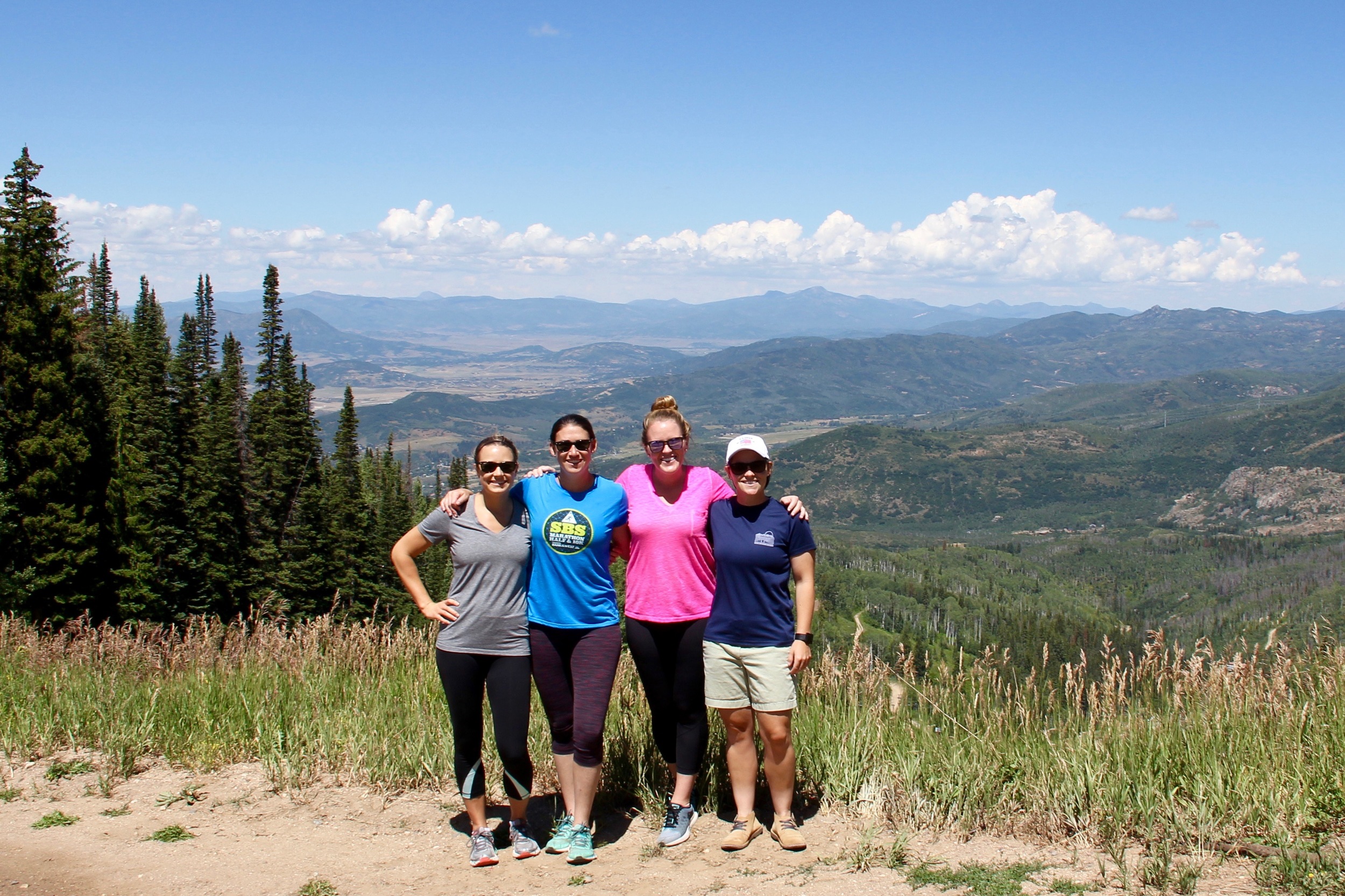 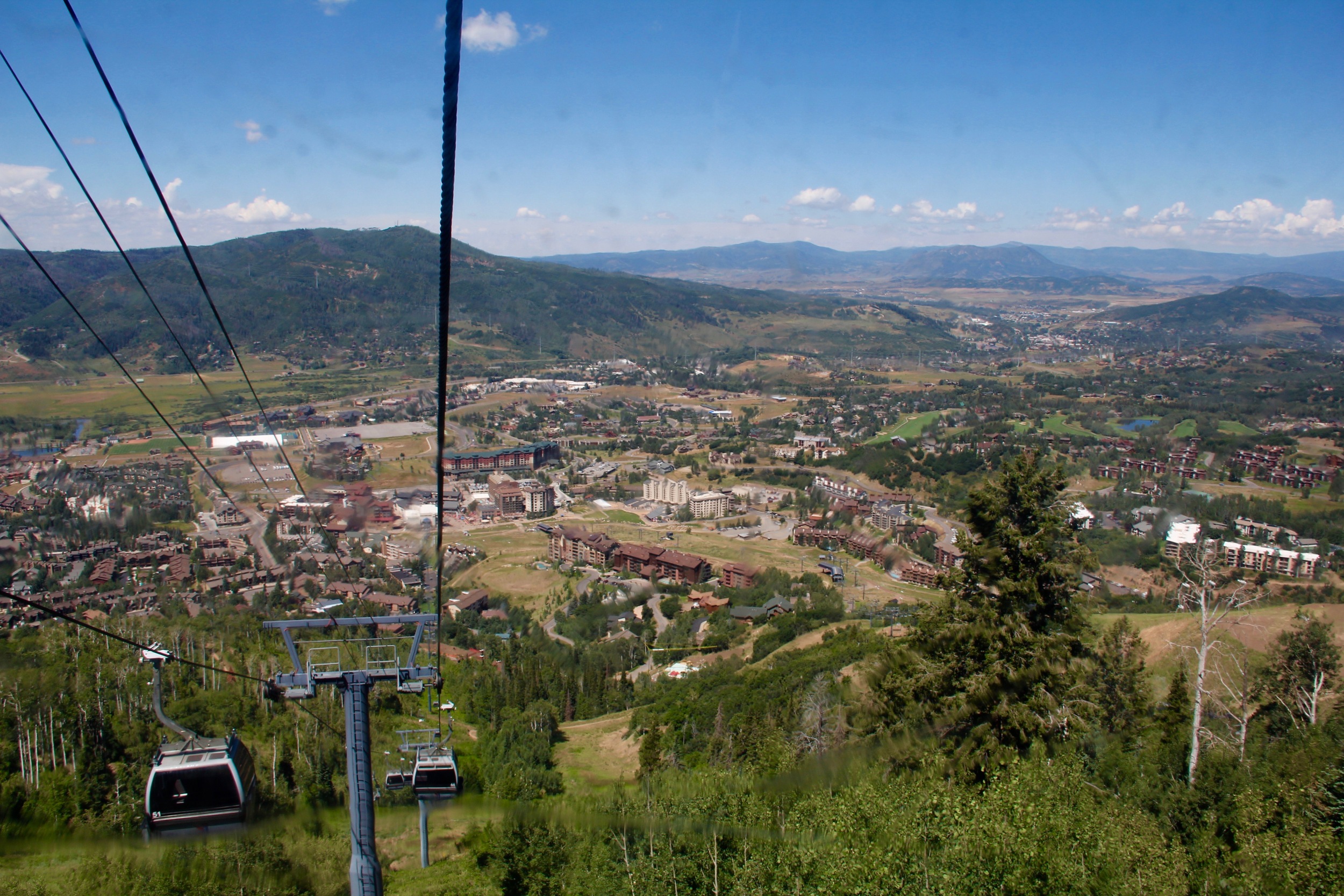 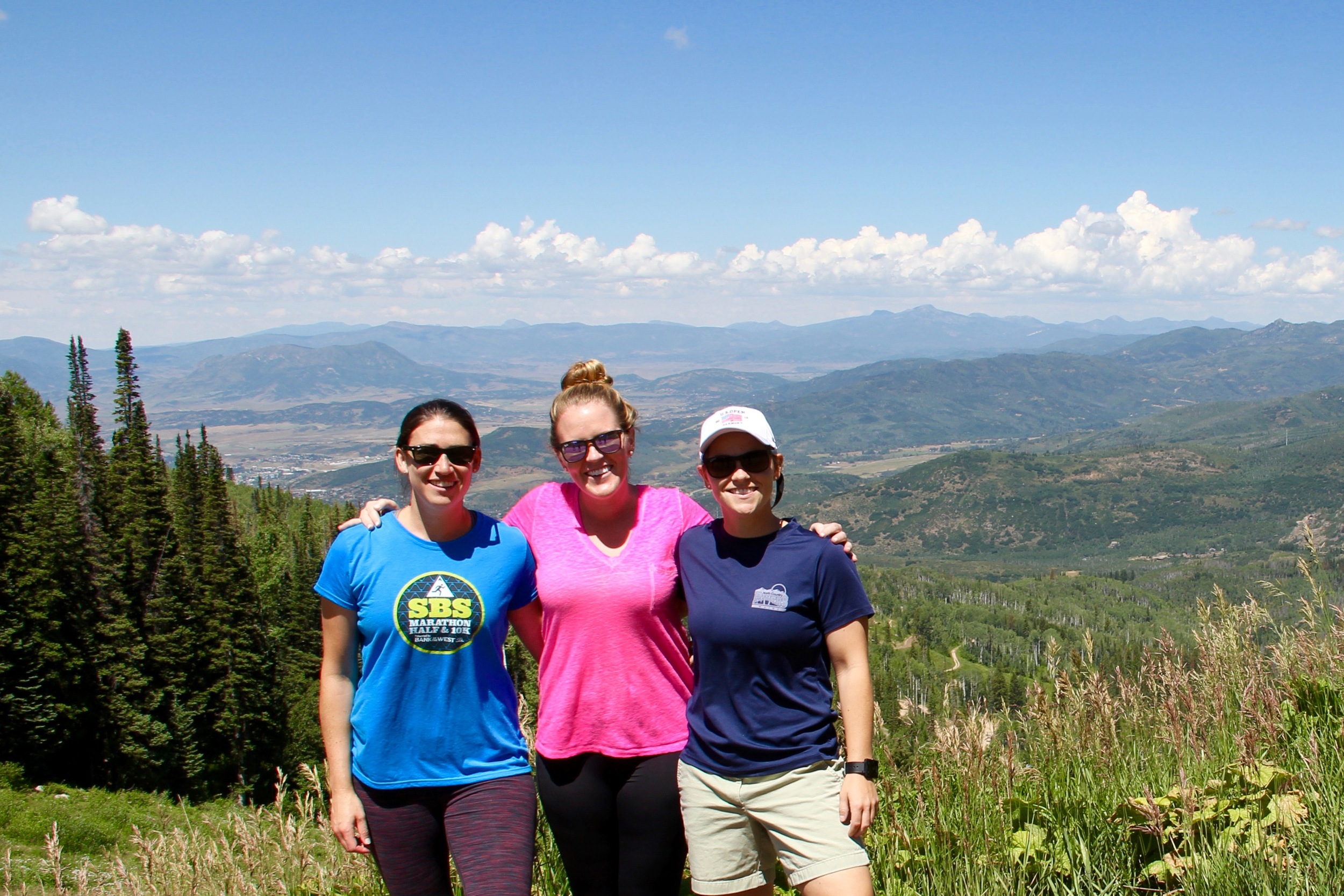 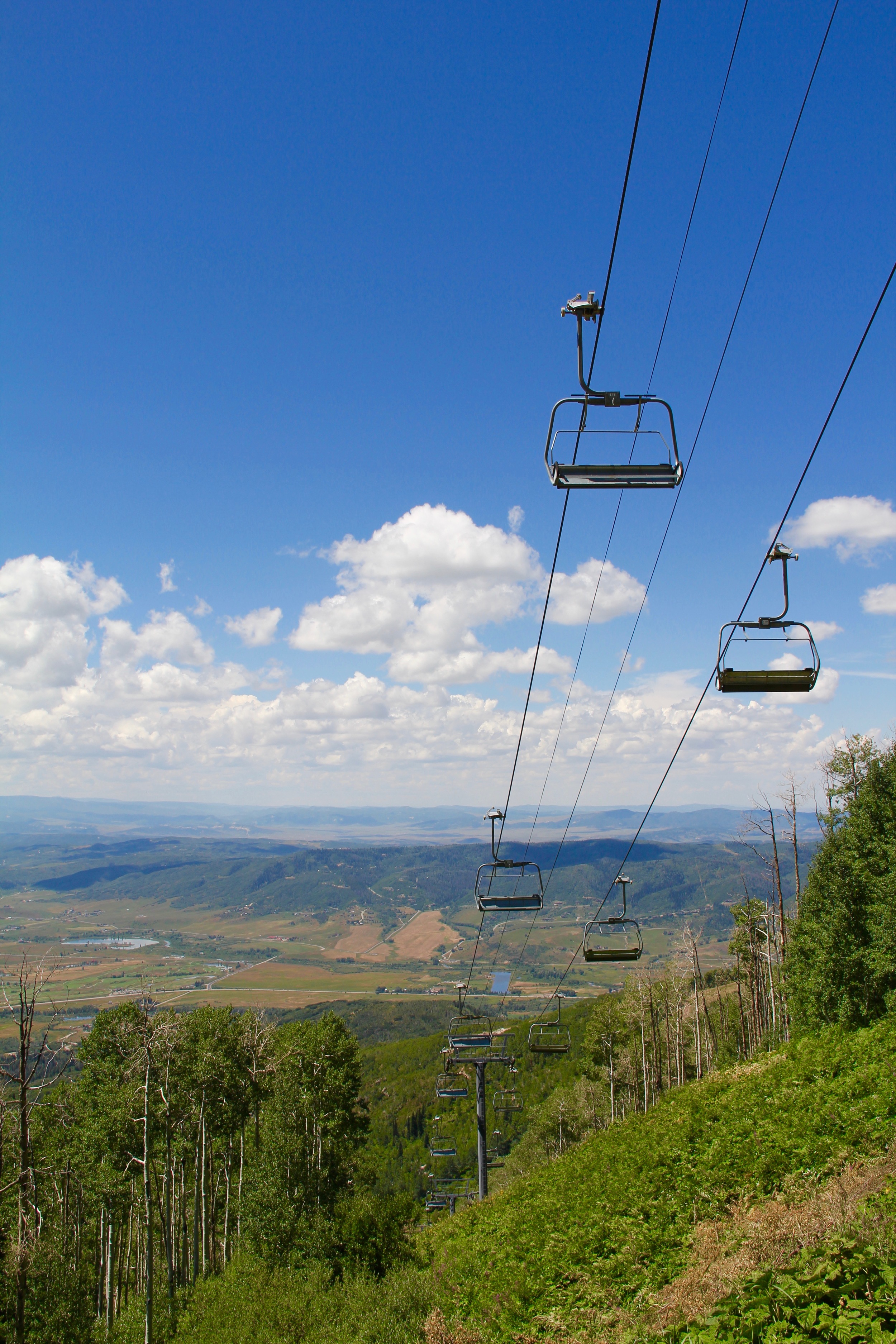 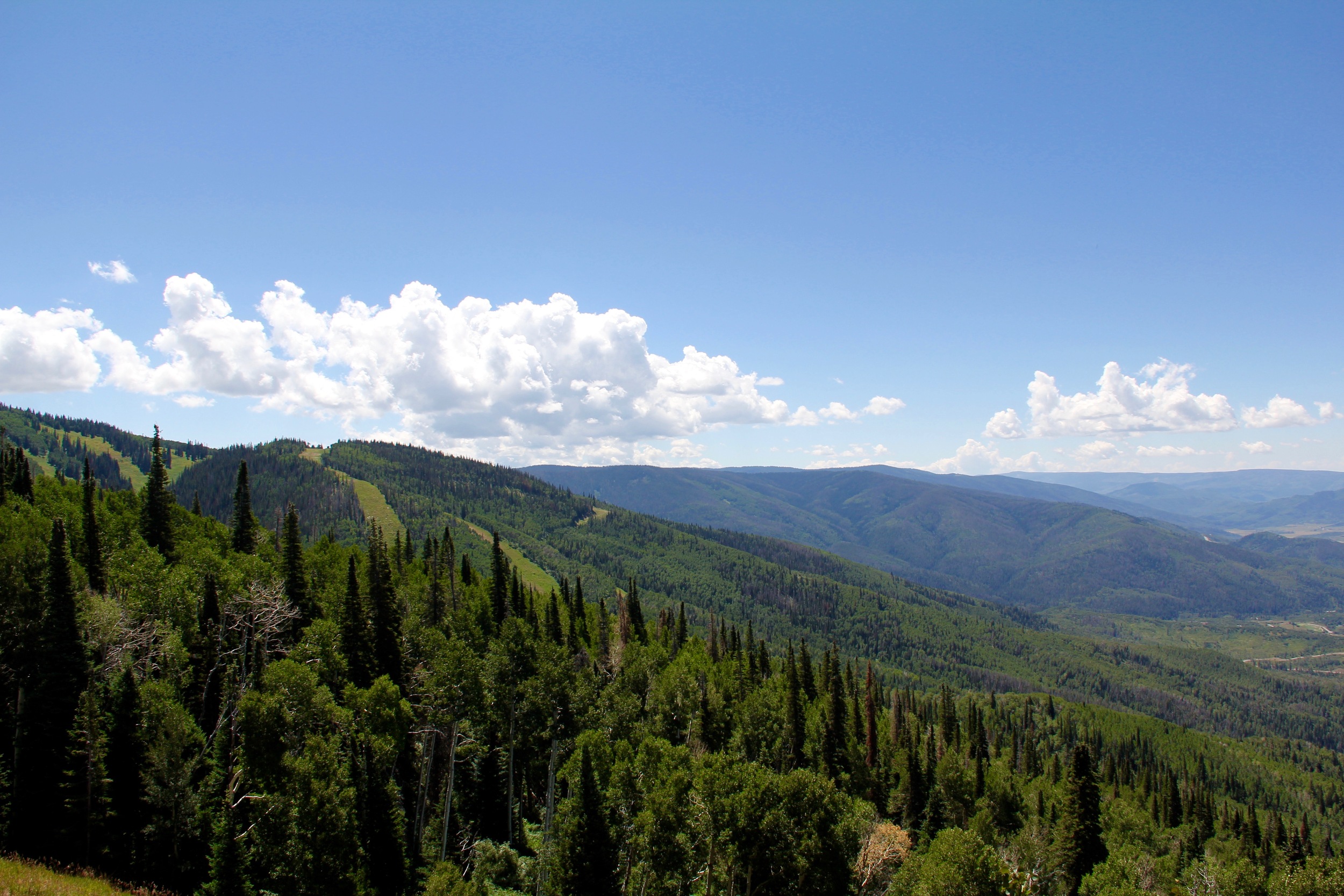 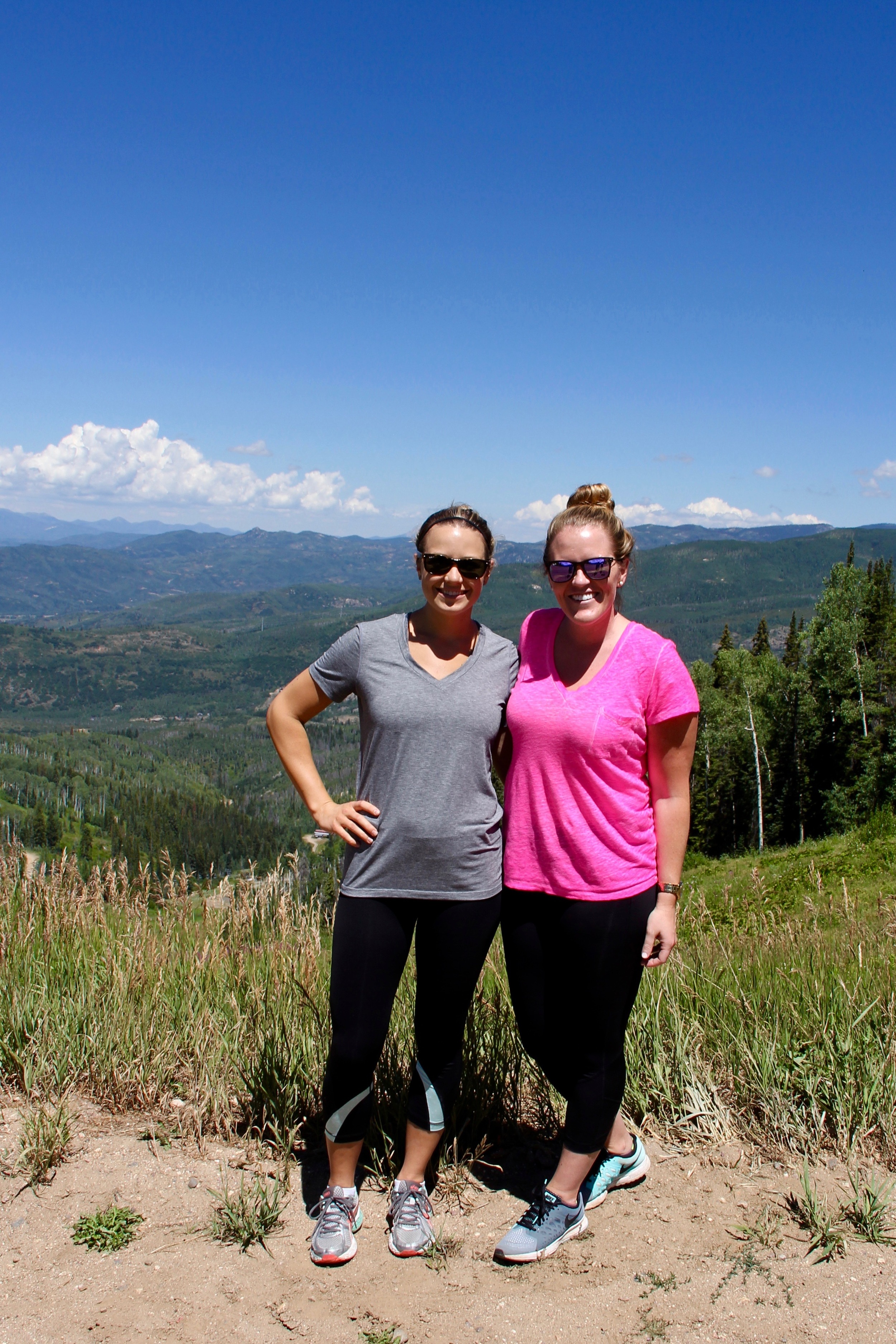 Needless to say, our weekend in Steamboat was amazing. Bigail, thank you so much for hosting us. We have so much of this trip still ahead of us, but we’re thinking we may have peaked on the first weekend on the road.

(Renee, put your concerns about about Randi’s phone shitting the bed to rest. Her phone defied the odds and managed to maintain 6% battery life for hours…)

Next stop: Arches and Zion National Parks in Utah

« We aren’t in Kansas anymore…thank God.